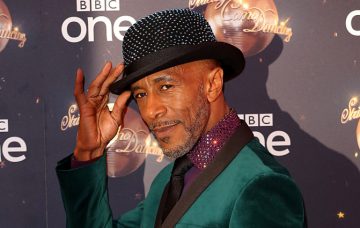 He reveals that he made peace with judge

The 57-year-old actor, who played the Cat in Red Dwarf, revealed that he made the grovelling apology to Strictly panellist Bruno Tonioli after the tweets were unearthed in August.

And judging by Bruno’s response, he and his fellow scorers won’t be holding it against Danny when the competition starts on Saturday.

Back in August, newspapers reported that Danny had previously made accusations of racial prejudice against Strictly on his Twitter account.

In 2016, after British-Ghanaian comedian Melvin Odoom was voted off the show in the first week, Danny claimed: “They always get rid of the black guy first.”

And the following year, he reacted to reports that Strictly chiefs were in “shock” following JLS star Aston Merrygold’s exit from the show.

He tweeted: “Bull [expletive] of the week. Strictly bosses pretending to be horrified at Craig Rev Hor sticking to their MO [modus operandi] and voting off the brother in the afro.”

Read more: Strictly’s Susannah Constantine ‘has no rhythm’ and is ‘unteachable’!

All of which must’ve left the Red Dwarf legend feeling a bit awkward on the set of the show.

And he admitted that he wasted no time in apologising.

He told The Daily Star: “The first person I went to in make-up was Bruno.

“He said: ‘Darling, we’ve known each other far too long.’ That was his response. I’ve known him since the Seventies. But as I said, if anyone was offended, I was there to apologise.”

Meanwhile, Danny – who now stars in BBC One series Death In Paradise – has admitted that winning Strictly isn’t everything.

“For me, that’s what I’m here for. I don’t see these guys as competition to be chopped off at the knee to win. I think that’s the wrong attitude.”