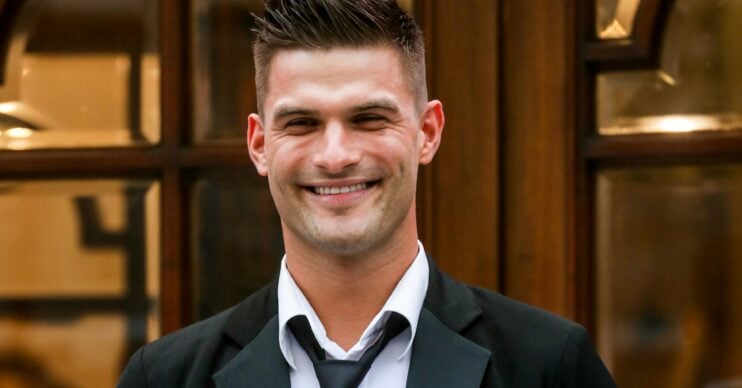 Strictly star Aljaz reunites with his ‘gorgeous’ best pals and thirsty fans are all saying the same thing!

The star is currently back in his native Slovenia

Strictly star Aljaž Škorjanec reunited with some of his best pals after almost two years away from them last night (Wednesday, December 29).

The star posted a reunion snap on his Instagram, and it had many fans’ pulses racing!

Just before Christmas, Strictly star Aljaž was finally reunited with his family in Slovenia. The 31-year-old pro dancer hadn’t been able to see them for close to two years due to the pandemic.

In heartwarming pictures and videos taken by his wife, Janette Manrara, Aljaž could be seen spending some quality time with his family and his young nieces.

Now back in his homeland, the star has had an opportunity to reconnect with some of his best pals too!

The dancer took to Instagram to share a snap from a large reunion he had with his mates last night. In the picture, Strictly star Aljaž can be seen hanging out with 14 of his friends. Aljaž penned a sweet caption to celebrate the reunion.

“Back together by popular demand!” he said. “Our lives go separate ways but WE always manage to meet along the way!

What did Aljaž’s Strictly fans say?

Aljaž’s snap may have warmed the hearts of many, but it seems to have got many people’s pulses racing too. Plenty of Aljaž’s 533k followers were left drooling over the snap of Aljaž and his massive group of mates!

“Wow I’d like to meet your mates,” one follower wrote, adding a flame emoji to let Aljaž know why.

“What a bevvy of beauties,” another said.

“What a good looking bunch,” a third follower said, with plenty of flame emojis.

“I won’t mind being part of that’s WhatsApp group,” another drooled.

“That’s a whole lot of testosterone!” a fifth said.

What else has Strictly’s Aljaž been up to?

While he might have been over in Slovenia, Aljaž still appeared on screens on Christmas Day here in the UK. The star took part in the Strictly Come Dancing Christmas special this year.

The 30-year-old dancer was paired up with legendary broadcaster Moira Stuart, 72, on the show.

Read more: Strictly’s Aljaž Škorjanec shares adorable video of him on ‘uncle duties’ as he reunites with family

The pair did the Salsa to the tune of Santa Claus is Coming to Town, and walked away with 33 points. They were joint-lowest on the night with The Repair Shop presenter Jay Blades.

Ultimately, it was singer-songwriter Anne-Marie and her dance partner Graziano Di Prima who came out on top. They did the cha-cha-cha to Feliz Navidad and picked up 40 points, as well as the Strictly Christmas star trophy.