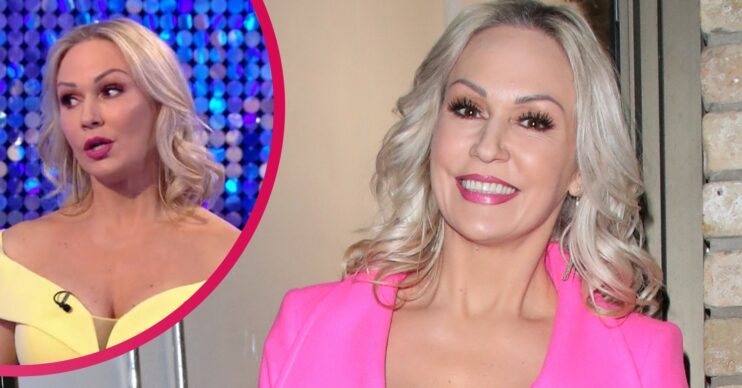 Kristina is in hot water after a string of "insensitive" tweets

Strictly Come Dancing star Kristina Rihanoff has apologised following backlash over tweets she made about the Russian invasion of Ukraine.

The Russian dancer came under fire over the weekend for a tweet saying “I don’t give a [bleep]” about the current crisis.

Russian-born Strictly pro dancer Kristina was slammed for now-deleted rants about the current crisis in Ukraine over the weekend.

The 44-year-old made a string of tweets about the Ukraine/Russia crisis over the weekend, leaving many of her 148.6k followers furious.

In one tweet, Kristina wrote: “I do want to focus on what sort of punishment Boris Johnson will have for destroying my family run business and 1000 of others. Many of my friends LOST businesses because of government lockdowns.

“Don’t give a [bleep] about the war but I do about the debt because of NO TRADING for 2yrs.”

The star also responded to a tweet made by Sky News about Russia being removed from this year’s Eurovision song contest.

“[Bleeping] breaking news,” she wrote. “Are you for real @SkyNews? And where are we at with bringing @BorisJohnson accountable for ruining thousands of small business while parting during lockdowns?????? This tweet EVERYTHING WHAT’S WRONG WITH THE UK MEDIA & USELESS @GOVUK #Eurovision.”

What did Strictly star Kristina Rihanoff say next?

However, yesterday the Strictly star took to Twitter to apologise for her tweets.

The 44-year-old posted a lengthy statement on her Twitter last night for her 148.6k followers to see.

The star began her apology by explaining that her responding to Sky News’ tweet about Eurovision was not her showing support for the Russian invasion of Ukraine.

She said: “It’s absolutely devastating for someone like me whose grandad [is] from Ukraine and I gave Ukrainian name to my daughter – Milena. My best friend is also from Ukraine.”

Kristina then went on to say that she wasn’t into politics and hates politicians because “they all lie”.

“Seeing the news is breaking my heart as I have Russian friends who live in UKRAINE and vice versa,” she continued.

What else did she say?

Kristina continued with her lengthy apology, saying that there have been “casualties on both sides”.

She then went on to say that the war should never have taken place and that the country leaders should have “found the way a long time ago to sort this peacefully”.

She continued, saying: “I’m not supporting Putin, war, invasion, lost lives and politics. I hate it as much as a human being possibly can. If I offended anyone it wasn’t my intention and I’m deeply sorry.”

Kristina then went on to say that she may have been born in Russia, however, she left 22 years ago as an American citizen.

“I can only hope and pray like everyone that this is over soon,” she said.

The star still received backlash for her words, however. “Classic case of think before you speak here. You’re only back tracking now because of the backlash. A little too late. The damage is done,” one of her followers said.

“Pity you had to wait for James Jordan to call you out,” another said.

However, some showed their support. “I agree with everything you said. Love to you and your family,” one follower said.