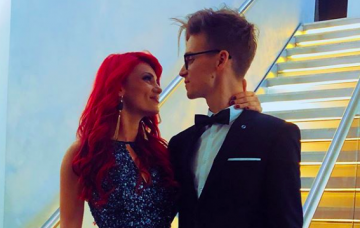 The YouTuber, 27, posted a cute pic of them cuddled up together with the caption: “Last day of chillin with this one before we start the tour!”

Last day of chillin with this one before we start the tour! 🤟🏼❤️

But the snap sparked engagement rumours as Dianne, a professional dancer on Strictly and Joe’s partner in the latest series, appeared to have a ring on her ring finger.

Of course, fans rushed to comment on Dianne’s jewellery.

Read more: Joe Sugg and Dianne Buswell kiss by fireworks as they see in 2019

One simply exploded “THE RING!!!!!!” and another asked “Is that a ring on dianne’s wedding ring finger?” Another follower wondered: “Is that a promise ring or an engagement ring?”

But others went full Sherlock in their analysis of the photo.

Someone pointed out: “Reading the comments, everyone is talking about the ring…. It is so obviously on her RIGHT hand. If you don’t believe me then look at the words on the stickers, that are backwards. If they are backwards it is so clearly her right hand.”

Another wrote, in agreement: “The photos flipped so the ring is on the wrong hand if it was an engagement ring.”

Unfortunately for fans of the couple, one of Joe’s representatives told The Sun that the rumours were completely untrue.

Joe and Dianne, 29, managed to get to the final in the latest series of Strictly.

Oh my it actually happened… WE ARE IN THE FINAL! @diannebuswell you amaze me every week in getting me from a two left footed mess to pulling off a full on routine in front of millions. You truly are a miracle worker 🙌🏼 thank you so much to everyone who voted for us and supports us. Without you we would not still be here and we’re forever grateful ❤️ so much love to you all x

Australian Dianne has been with the series since 2017, following her 2015 appearance on the Oz version of Dancing with the Stars.

According to Strictly’s Faye Tozer, all their co-stars on the show were hoping to see romance blossom between the two.

They initially denied rumours they were together, which included reports of a kiss at the wild Strictly afterparty in Blackpool.

But things are really hotting up between Joe and Dianne.

Last month, the pair took a romantic trip to his hometown in Wiltshire, where they rang in the new year and Dianne got to meet Joe’s family.

Were you hoping to see Joe and Dianne get together? Leave us a comment on our Facebook page @EntertainmentDailyFix and let us know!