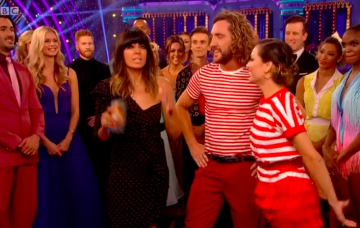 To whoever is in charge of BBC subtitles, you deserve a medal

OK sure, some people were watching Saturday night’s Strictly Come Dancing for the dancing, but a lot more of us were watching for any Seann Walsh and Katya Jones awkwardness.

And – after a week of dramatic headlines thanks to that drunken kiss – viewers spotted an awkward subtitle error.

After dancing the Charleston, Seann and Katya were listening to the judges’ results when viewers noted the gaffe.

The pair received a six from Craig Revel Horwood and then two sevens and an eight.

Fans were quick to spot the typo.

One commented: “That awkward moment the person in charge of the subtitles on #Strictly does a typo.”

Another wrote: “An unfortunate typo on tonight’s #strictly subtitles for Seann and Katya.” 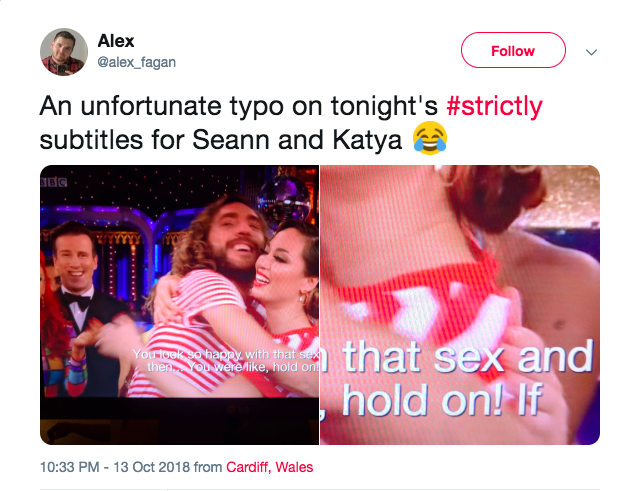 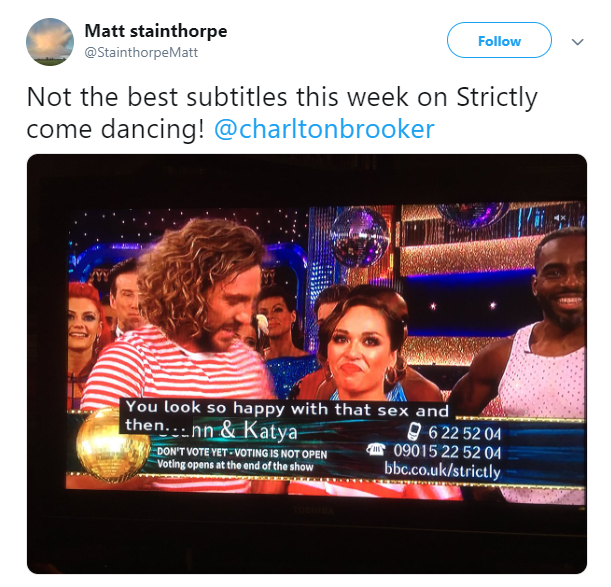 Many others thought it must be deliberate, tweeting: “Subtitles person having a laugh on #Strictly. #StrictlyComeDancing #strictly2018?”

A third commented: “Freudian slip if I ever saw one. These subtitles on #Strictly during judges’ scoring of Sean(n) and Katya 😳”.

It followed week-long headlines about the contestants’ drunken kiss on a night out, which they have both apologised for and called it an “one-off mistake”.

Comedian Seann was subsequently dumped by his girlfriend and has been heavily criticised by viewers for his behaviour.

Katya was forced to defend her marriage to husband Neil Jones, who also stars on the show as a choreographer, and the pair have insisted they remain together.

The BBC dance show avoided direct mention of the scandal, although Claudia seemed to reference it during the intro as she joked: “It’s been a quiet week”, and her co-host Tess Daley added: “Other than the odd headline…”

Documentary maker Stacey Dooley took on the Foxtrot with her partner Kevin while DJ Vick Hope and Fraziano performed the Quickstep.

Read more: Strictly bosses ‘step up security for Katie Piper as her acid attacker is released from prison’

We love a subtitle error, and this one was particularly good. Although – with everything going on – it’s hard to believe this one was an accident…

What did you think of Saturday’s show? Leave us a comment on our Facebook page @EntertainmentDailyFix and let us know what you think.