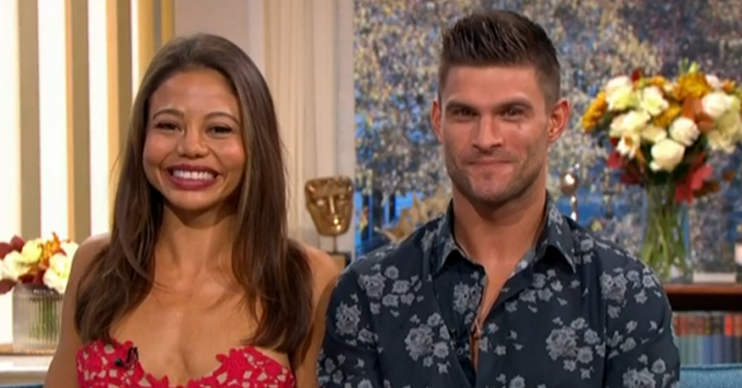 Strictly: Emma and Aljaz in tears after prep for this week’s dance

They're ready for week three!

Their Saturday night tango left the judges at loggerheads, but that doesn’t seem to have bothered Strictly Come Dancing stars Aljaz Skorjanec and Vicountess Emma Weymouth.

Appearing on This Morning, they revealed to hosts Holly Willoughby and Phillip Schofield that preparations for Movie Week are in full swing.

And the pair revealed they were rather emotional to discover they’d be dancing the foxtrot to the theme from the Downton Abbey movie.

Aljaz revealed: “It’s beautiful music – the theme tune to Downton Abbey – it’s so powerful. We actually cried when we heard it for the first time.”

One thing that isn’t making the couple cry, though, are the nice comments they’re receiving from the judges.

Emma said: “The lovely comments are so encouraging, it’s all so new and it’s such a steep learning curve.”

Showing off her impeccable manners, sweet Emma even arrived armed with brownies for the show’s hosts, with Phillip tucking straight in.

We wonder if she’s made any for Aljaz’s dancer wife Janette Manrara, who Emma revealed has “calmed” her down ahead of the live shows.

She said: “They’re a dream team. We’re experiencing this whole range of emotions and they’re so solid and so supportive.”

She added: “You just don’t know how to feel and you doubt yourself. I’m very hard on myself, it’s my biggest flaw and I need to work on that.”

Emma also revealed that she’s been commuting between her lavish Longleat home and the Strictly studios for her rehearsals with Aljaz.

“I’m always up and down the motorway. My children are two and four years old, so I read them bedtime stories and put them to bed and then get in my car and drive up to London to be at work the next day,” she said.

She added: “Your ordinary life doesn’t go away, this is all consuming, you’ve just got to balance it out.”

Asked if they practise in the luxurious surrounds of Longleat, the pair laughed and revealed they actually rehearse in the village hall.

Said Aljaz: “We were in the village hall, it’s a stunning little place and the best thing about it is it’s so peaceful. When we rehearse in London it’s right in the middle of town.”

Looking forward, Emma hopes her Strictly journey is a long one and, with Aljaz revealing she most definitely has potential, the partnership could be on screen for some time to come.

“Even from day one, just learning steps you have that natural talent you do it really quick, so it gives us lots of time to work on the technique and performance, but I just love how you’ve thrown yourself into it. I’m loving every second of it.”

“I never want to let you down,” Emma added sweetly.

Away from the Strictly dance floor, Aljaz has also been meeting the youngest member of the Strictly family – co-star Gorka Marquez’s daughter Mia.He shares the tot with Aljaz’a 2017 partner Gemma Atkinson.