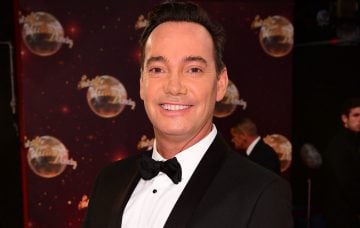 Strictly Come Dancing judge Craig Revel Horwood has said it is time to “get on with the show” now Seann Walsh and Katya Jones have been eliminated.

The pair – who have been at the centre of a media storm after they were pictured kissing on a night out despite both being in relationships at the time – were shown the door at the weekend.

Asked whether the distraction was over now they have left, Craig said: “Yes, thank goodness we can get on with the show now. That’s great, I’m loving it, and the dancing is spectacular.”

Speaking on the red carpet at the Pride of Britain Awards, Craig said he was not surprised Seann was in the bottom two.

“He wasn’t the best dancer there on that night,” he said.

“He has had some fantastic dances. When he did Matrix it was absolutely fantastic. If he was doing Matrix that particular week I don’t think he would have been in the bottom two. I think it’s down to the dancing.”

Craig said he did not think the couple’s kissing scandal affected the voting.

“I don’t think so. I think people can see through all of that, can’t they?” he said.

Several other Strictly stars were at the awards, including Danny John-Jules, Dr Ranj Singh and Lauren Steadman.

Danny said he was too busy with the show to have been be distracted by the kissing controversy.

The actor, who is partnered with Amy Dowden, said: “We didn’t really have time to be distracted. I don’t even know what I’m doing after work to mind about what anyone else is doing.

“I put my head down on the pillow and I’m back in front of Amy. It’s like the snap of a finger!

“If you want to tell me about someone else’s evening it isn’t even going to get any airplay.”

Dr Ranj said he and his dance partner Janette Manrara had been working on their samba ahead of the next show.

“Mondays you know you are not going to get everything but Tuesday is probably the day where you are like, ‘I really need to get this down’, and then Thursday we run it 10 times straight in a row and that’s tough.”

The doctor said the dancing has changed his shape.

“I found an ab!” he laughed. “I might have found more than one now. I think I’ve toned up which is great. I feel so much more confident for it.”