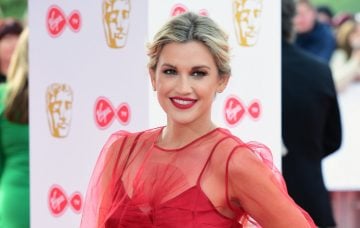 Is love in the air at Strictly?

Strictly Come Dancing star Ashley Roberts and pro dancer Giovanni Pernice are reportedly in the early stages of a romance.

The pair – who are not partnered together on the BBC show – are said to have hit it off backstage and have been on a string of secret dates in London over the last few weeks.

According to The Sun, a source claims “things are going well” between former Pussycat Doll Ashley, 37, and Giovanni, 28.

The insider told the publication: “The spark between Ashley and Giovanni has become quite widely noticed among the crew – they just seem to really hit it off.

“He is training up north at the moment while she is based down here so they only get to see each other towards the end of the week. But  they’ve been making the most of it.”

They added: “After the show each week they’ve been heading out for drinks together in London and just hanging out and looking very cosy.”

The gossiper said it’s “very early days” for Ashley and Giovanni, but “things are going well” for the singletons.

Back in 2015, Giovanni had found love with fellow contestant Georgia May Foote after the pair were partnered together on the show.

They had a year-long relationship before calling it quits in the summer of 2016.

Earlier this month, the Italian dancer denied “nonsense” claims that dancers and celebrities are hooking up behind the scenes.

Giovanni – who is partnered with married Faye Tozer on this year’s series – was reacting after former Strictly pro Gleb Savchenko suggested things happened behind the scenes that viewers weren’t aware of.

Gleb had given an earlier interview about relationships between professionals and celebrities, after Katya Jones and Seann Walsh were caught snogging on a night out.

Gleb had told The Sun at the time: “We’ve seen Seann and Katya making out outside a bar and if you asked me if I think people like Giovanni and his partner or any of the others are making out when no one is seeing it, I cannot answer that question. It could well be happening.”

However, Giovanni told The Sun: “This is total and utter nonsense! No one has any idea why Gleb is saying stuff like this. It’s utter rubbish.”

Ashley is partnered with Pasha Kovolev on this year’s series.