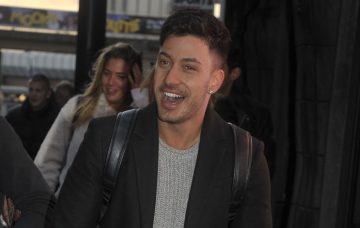 So much love in the air!

We’ve all been so focused on whether or not Strictly Come Dancing’s Gemma Atkinson and Gorka Marquez were dating that we totally missed ANOTHER blossoming romance!

He broke the news with a sweet pic showing him planting a kiss on Jessica.

Or attempting to, anyway, as her head is turned to face the camera so it looks like Giovanni is about to miss his mark!

The new romance came as a surprise to many fans, with one commenting: “I’ve been so wrapped up with Gorka and Gemma that I just did not see this coming!”

Another joked: “Gio she’s not quite so committed to that kiss as you are.”

A third remarked: “Whaaaat!!!!! Since when were you two a couple!”

And a fourth said: “So that’s Gorka and now the Italian is taken…!! Lol who knew until Valentine’s Day.”

Gorka and Gemma unveiled their relationship by sharing an identical pic to their Instagram accounts, showing them sitting next to each other on the beach.

Meanwhile, Giovanni and Jessica’s romance may seem as if it came out of the blue, but the pair were linked towards the end of last year.

The Sun reported in December that the couple had been dating in secret for a month after being introduced by Jessica’s brother Mark, a past Strictly contestant.

A source said at the time: “They’ve been on a few dates, but it’s early days. They met through her brother Mark’s Strictly connections from when he was on the show and they’re getting to know each other.”

So much love in the air!

Did you have a good Valentine’s Day? Leave us a comment on our Facebook page @EntertainmentDailyFix and let us know!