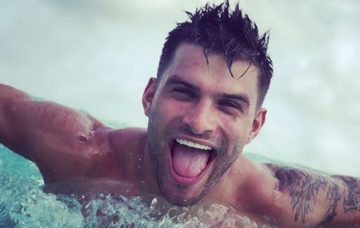 Fans begged his wife Janette to move out of the way!

If you’re the shy type, look away now! Strictly Come Dancing professional Aljaz Skorjanic has posted his naughtiest picture to date on Instagram.

In nothing but his birthday suit, the cheeky dancer has roped in his wife and Strictly co-star Janette Manara on the joke, begging her, “Please Janette, don’t move your head!”

Janette’s head, and shocked expression, is the only thing separating Aljaz’s Strictly glitter balls from the rest of the nation – much to the disappointment of fans.

Read more: Michelle Keegan signs for Who Do You Think?

One fan also pointed how Janette’s hair had been the saviour of her husband’s modesty!

“Never has a hair bun been so strategically placed,” they wrote.

Another fan also urged Aljaz, 28, to opt for a similar outfit for his upcoming Strictly Come Dancing: The Professionals show on Saturday.

“It would be a great outfit to wear in Hull on Saturday Aljaz,” urged an admirer.

Others also commented on how much they loved the couple’s down-to-earth personalities and sense of humour.

“You two are so funny, love watching your stories. Beautiful couple, beautiful people,” wrote one fan.

Aljaz is no stranger to showing off the odd hint of his six-pack to his fans, regularly posting topless photos onto his social media.

However, it’s definitely a case of ‘you can look but don’t touch’, as the dancer has been happily married to Janette, 34, for 10 months.

They were forced to delay their honeymoon due to their filming schedule but jetted off to the Seychelles in March – a chance for more topless photos from Aljaz!

The couple will soon be gearing up for the 2018 series of Strictly, which usually begins around September time.

This year’s rumoured line-up is already sparking huge excitement, with names such as Scarlett Mofatt, Joey Essex, Maya Jama, Les Dennis and even Piers Morgan in the running.

Last series saw Aljaz partnered with actress Gemma Atkinson, who later went on to go public as a couple with another dancer, Gorka Marquez.

Whoever is partnered with him this time is one lucky lady!

Do you have a crush on Aljaz? Should Janette be annoyed by his revealing selfies? Leave us a comment on our Facebook page @EntertainmentDailyFix and let us know what you think!