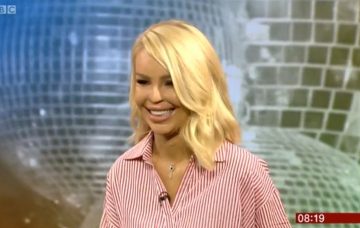 She can't wait to get on the dance floor!

Katie Piper has been confirmed as the first celebrity contestant for Strictly Come Dancing 2018.

The hugely anticipated announcement was made on Monday’s BBC Breakfast.

Katie said: “It’s been so hard to keep secret!”

The mum of two said she’s known for “quite a while” and it’s been difficult to keep the news secret, as she’s so excited she wants to share it with everyone!

Read more: Latest names in the frame for this year’s Strictly

“For me, it’s really out of my comfort zone and not something I’ve ever done before,” she said.

“I was really worried I’d be the first to go home or be dreadful.”

Television presenter Katie, who survived a horrific acid attack in 2008, said the only person she told was her husband, who thought she was joking!

Katie said she loves dancing but isn’t the most coordinated or rhythmic person!

She said: “I think any fear or reservations I have is the fact I don’t have the natural rhythm but I like the side of it being a challenge. I’m quite a competitive person so if I do have something in my life I can’t do it inspires me to learn it.”

Katie – who is mum to daughter Belle, four, and seven-month-old Penelope – said she’s been working hard in the gym recently, not for Strictly, but just for life in general.

But she admitted: “I think I’ll have to get more coordination and rhythm.”

The star said she’s been watching old Strictly clips to prepare herself for the show but it’s actually made her even MORE nervous! “Just seeing how quickly they all move and in the heels and long dresses so it’s a bit daunting.”

Katie insisted she hasn’t a clue which other celebrities are taking part and nobody will tell her when she asks!

She said she’s keen to be paired with Giovanni Pernice but hasn’t any idea who her pro partner will be.

“I have no sway in that at all, so Giovanni if you’re watching, I’m coming for you!”

Katie said: “I’ve faced challenges in my life before so I’m going to try to apply the same kind of psychological mindset to it and I think whatever happens to me on Strictly I hope to come away with a different kind of confidence in a different area of my life.

“Even if I don’t last long, I will come away knowing something I didn’t know before and that’s a bonus.”

Katie added: “I think [being on Strictly] gives a wider message it’s irrelevant my past or the way I look or anything like that. That’s something I’m really proud of.

“From a personal point of view, it’s so refreshing to be doing something so light-hearted and so fun, it’s really nice.”

The rest of the celebrity contestants will continue to be announced over the coming days, with the second reveal expected during Monday night’s The One Show.