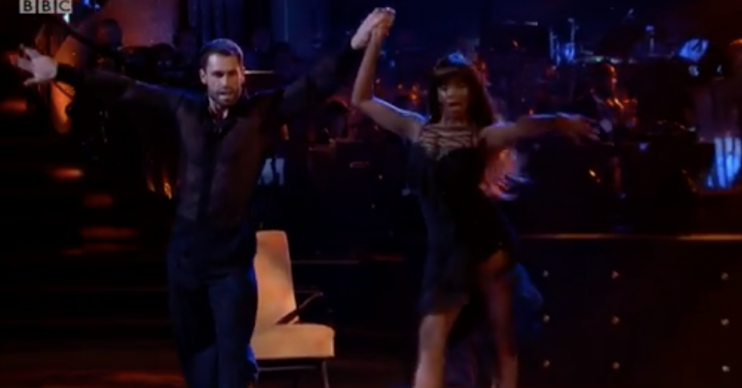 The judges’ scoring on tonight’s Strictly Come Dancing has angered some viewers during week four.

Much of the frustration was centred around Kelvin Fletcher and his partner Oti Mabuse.

The judges were basically panting and salivating after their electrifying Rumba.

And they awarded the sizzling duo 36 points… nine each.

But that wasn’t high enough for his fans, who felt he deserved more.

Saffron Barker received a score of 33, but many viewers felt Kelvin should have been more ahead of her than he was.

She and partner AJ Pritchard performed a contemporary number to Because You Loved Me by Celine Dion.

So some of the judges think that Saffron’s dance was as good as Kelvin’s? The judges are drunk again. #Strictly

However, it was Kelvin missing out on topping the leader board after Kazim scored 38, including two 10s, for his tango with pro Amy Dowden, that really irked viewers.

Well those scores were all over the place tonight! I seem to be watching something different to the judges. Actually shocked at David & Mike’s scores. And I thought Kelvin deserved 10’s. #Strictly pic.twitter.com/cOjgcxQuUO

Can’t believe kelvin didn’t even get at 10 but Karim got 2 for his tango? Scoring very very odd tonight… 🤔🤔 #strictly #strictlycomedancing

Well those scores were all over the place tonight! I seem to be watching something different to the judges. Actually shocked at David & Mike’s scores. And I thought Kelvin deserved 10’s. #Strictly pic.twitter.com/cOjgcxQuUO

After all that praise for Kelvin what would he need to do to get a 10?#Strictly

@kelvin_fletcher get 9-9-9-9 but not 1 judge had 1 bit of criticism about his dance, Even Craig didnt say anything so why not 10’s???? Bit unfair @bbcstrictly #Strictly

Read more: Another EastEnders fave eyeing up show for next year?

Did you think the scoring was unfair?! Leave us a comment on our Facebook page @EntertainmentDailyFix and let us know what you think.