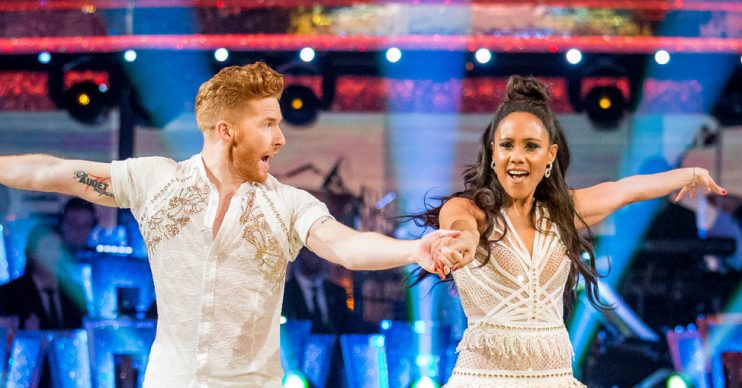 Beans on toast, anyone?

It’s the first year that he’s been teamed with a celebrity partner, and it seems as if fame has gone to Strictly Come Dancing pro Neil Jones’s head.

He is paired with footie ace Alex Scott for the new series and the dancer left viewers bemused when the show’s official Twitter account revealed the “on microphone moments” from week two.

During their cha cha, Neil can be heard encouraging Alex with some rather odd words of wisdom.

As he strokes her leg, he is heard to say: “It’s my favourite leg.”

The weirdness didn’t stop there, though.

You’ll need sound for this! 🔊 Listen to all the ‘on microphone’ moments from Week Two of #Strictly. pic.twitter.com/tHNa4vMD0W

Later in the dance he said: “Beans on toast.”

Before telling Alex: “Push me!”

Viewers were quick to laugh at Neil, replying to the show’s official Twitter account to ask if Neil was “okay”.

Favourite leg? Beans on toast? 😂😂 Neil are you okay🤣

This is my new favourite video😂 @aliceh_xo

I always wonder what they say during the dance. This was hilarious!

Neil has yet to explain the comments, but we most certainly hope his mic is left on during their week three dance.

As part of Strictly’s Movie Week, they will take on the rumba to How Far I’ll Go from Moana.