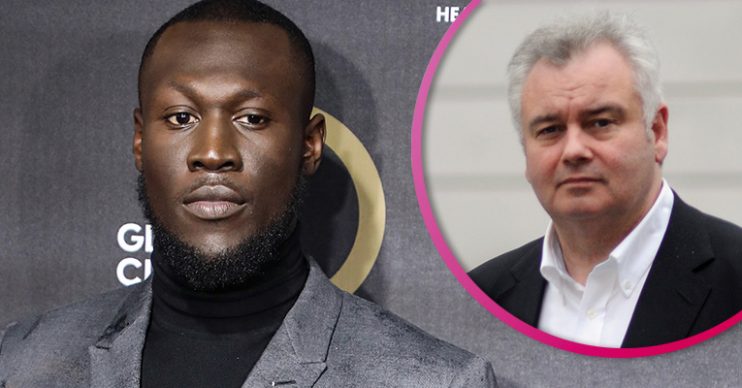 This Morning host under fire again…

Rapper Stormzy has slammed comments that This Morning host Eamonn Holmes made about the Duchess of Sussex.

Back in November, Eamonn came under fire after calling Meghan “uppity” – a term that has racial connotations.

He said on This Morning: “If you have an uppity attitude, you’re only through the door two minutes and suddenly you’re sitting at Wimbledon and your royal protection are saying: ‘No photographs, no photographs!'”

Historically, the word “uppity” was a slur used in 19th Century America to insult black people who “didn’t know their place”.

Read more: William and Harry “had a furious clash the night before family day at the polo”

However, Eamonn was said to be “unaware” of the history of the term.

Now, however, Stormzy has laid into Eamonn, telling a radio station he should “get the f**k out of here”.

It comes amid claims that some media coverage of the duchess has been racist.

He added: “She does her thing, I ain’t heard her say nothing crazy, and they just hate her.”

Read more: Adele is starting to see this singer in a romantic light after he helped her shed seven stone

He added: “I just look at her and I think she’s got that arrogance. I’m like, nah, she’s black man. Just get the f**k out of here.”

Continuing to stick up for the duchess, he continued: “If I told someone write a list as to why you hate Meghan Markle, the list is rubbish. There’s nothing credible to it but there’s an obsession with the royal family.”

Last week, Meghan and Prince Harry announced they were stepping down as senior members of the royal family.