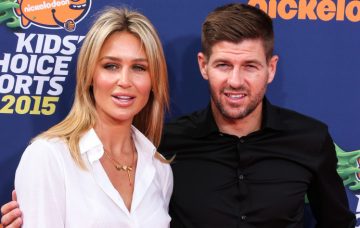 It's a family day out!

Former footballer-turned-manager Steven Gerrard has shared an adorable family shot on a day out in the park.

The photo shows Steven and his four children on a swing set, swinging alongside each other.

While his three daughters swing on their own, one-year-old son Lio is perched on his dad’s lap.

His fans were quick to comment on the photo, saying the family are “goals.”

“Teaching em early how to swing it in like you used to yeah 👍 genius,” said another fan.

But some were concerned the activity was too dangerous – joking that the Rangers boss might injure himself.

“Right Stevie you better not get injured on that swing. Big game tomorrow. Need you fully fit,” someone commented.

The footballer and his wife, model Alex are parents to Lilly-Ella, Lexie and Lourdes – and completed their family with son Lio last year.

The couple married in 2007 after dating for five years.

Steven has been settling into his new role as manager of the Rangers.

He took on the role in June, after having served as manager of the Under-19 team for the Liverpool Academy.

What do you think of the family shot? Leave us a comment on our Facebook page @EntertainmentDailyFix and let us know what you think!