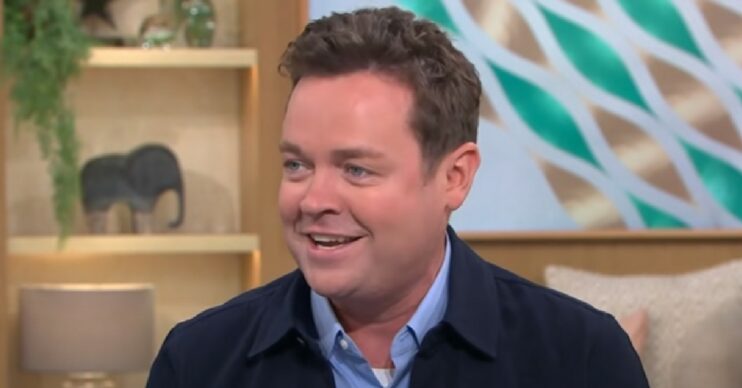 Stephen Mulhern has left his Twitter followers stunned today as he showed off his “dapper” appearance for the BAFTAs.

The In For A Penny and Saturday Night Takeaway star, 45, will be attending the awards on Sunday evening (May 8).

Sharing a video to Twitter, Stephen was dressed up in a black tuxedo.

Get ready, @BAFTA! Mulhern is coming! Don’t start without me… pic.twitter.com/r5jtNdWHbi

The clip was captioned: “Get ready, @BAFTA! Mulhern is coming! Don’t start without me…”

In the video, Stephen says: “Hello BAFTA, how you doing? I’m on my way.

“I hope you haven’t got any surprise awards for me tonight… that you haven’t told me about,” as he stared into the camera and pouted.

Fans gushed over Stephen’s look with many calling him “dapper” and “handsome”.

One said: “Looking very smart and dapper Mr have a great time.”

After that, a third tweeted: “Good luck and you’re looking extremely handsome as usual.”

Ant and Dec’s Saturday Night Takeaway, which features Stephen, is up for the Entertainment Programme award.

However, the show will go up against An Audience With Adele, Life & Rhymes and Strictly Come Dancing.

But during this year’s series, he took a bit of time out after having to rest under doctors’ orders.

He missed a few shows in February and the start of March.

At the time, following concerns from fans, Stephen wrote on his Twitter: “Hello all, sorry I’ve been quiet on here recently and thank you for all your lovely messages.

“I’ve had some time off and been resting up on doctors orders. I’m on the mend, I’m happy to say, and looking forward to getting back to work soon.”

When Stephen did make his return to the show, fans were over the moon.

What do you think of Stephen’s look for the BAFTAs? Tell us on our Facebook page @EntertainmentDailyFix.