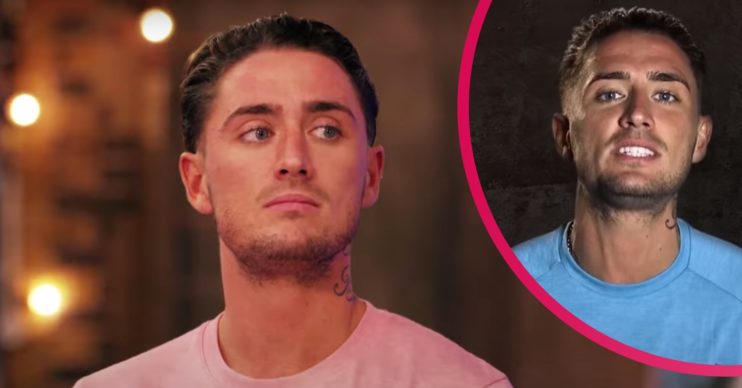 Stephen Bear has been blasted by Instagram users for ‘making light’ of suicide.

The star, known for winning Celebrity Big Brother in 2016, seemed to indicate that going through the motions of taking one’s own life online could be a tactic to derive sympathy in his unpleasant tirade.

Read more: Why is Susanna Reid not on GMB today?

He also seemingly chided fans for their hypocrisy, claiming to be “so strong”.

“I was so tempted to do the ultimate [blank]ing narcissist move and make everyone feel sorry for me,” Bear said in the now-deleted clip.

You’re lucky that I’m so strong.

“All I’ve had to do [is] get a bit of rope, sling it round my neck… throw it off a [blank]ing ledge, yeah? Get one of my mates to save me… because I could easily set that up.

“And all you people, you’d have been like [covers mouth with hand].

“Then you all backtrack. Then you delete all your comments and all your news articles will all disappear.

“That’s what happens. But you’re lucky that I’m so strong.”

Social media users poured scorn on Bear for his comments.

One person, who tweeted a copy of the video, fumed: “What a disgusting vile pig!

“Please watch it all and make your own mind up about this vile statement. You never fail to disgust me.”

The tweet, posted late on Tuesday (December 8) night has since gone viral, accruing thousands of engagements.

Responding, another person seethed: “OMG what an actual pig.”

“Disgusting how he’s mocking people who have committed suicide. All his followers need to stop following him, remove him from social media so he becomes irrelevant,” claimed a third person.

And someone else added: “What a thing to mock and say things about so easy. When you have been there and been close to that, then you will realise.

“People need to be careful what they are saying on social media!”

He reportedly mimicked the Love island 2017 contestant breaking down in tears after she accused him of posting a secretly-recorded clip of her on X-rated website OnlyFans.

What did Stephen Bear say?

“Look at this one, you ready? Action,” he said to the camera as he feigned crying.

Georgia, 25, recently made the accusation against Bear. His OnlyFans account appears to have been recently taken down.

She accused him of making libellous comments about her after he claimed she owed him money from their joint fashion business venture.

Bear has also been linked in having brief romances with models Chloe Khan and Jemma Lucy.

He took part in an episode of Eating With My Ex on BBC Three with Jemma in 2019 in which he admitted to cheating on her.

But she previously went public with her suspicions before that – and even contacted one of his flames.

Jemma claimed: “Bear would always deny it and he’d say they were just jealous and [other people] were trying to split us up.

“I believed him the first few times but then just had a gut feeling and messaged one of the girls back.

“I spoke to her and even met her, and everything she was saying just added up.”

Jemma, who got matching tattoos with Bear during their two-month fling, described their time together as “crazy”.

“There was loads of partying,” she said.

However, during their BBC Three showing, Bear claimed his drink had been spiked while admitting to cheating.

He confessed: “I need to cleanse my soul, I cheated, I did. I couldn’t help it Jem, and I did it.”

Bizarrely, he also threw a drink in his own face as they sat across the table from one another.

Chloe didn’t have entirely happy memories of her time with Bear either – although she did later decide to let things go.

The model blasted him after their romance in the CBB house: “I massively regret getting with him because he’s an absolute psycho. I just can’t stand him.”

But she said of a later ‘awkward’ meeting: “We had a chat, and I hold nothing against him. He is still my friend… He is a [blank] though.”

Since his biggest TV gig, Bear’s behaviour has seen him cast in shows such as Celebs Go Dating, Just Tattoo Of Us with ex Charlotte and MTV’s The Challenge.

But he has courted most attention in the press for his clashes with romantic partners on social media.

He continued a war of words with Charlotte across Twitter and Snapchat for months.

And in 2018 he denied accusations he was responsible for the death of a nine-month-old puppy.

He told Digital Spy: “It’s unimaginable what happened. Just imagine coming down and finding your puppy dead in a blanket.

“I’m still heartbroken about it but the vets and other professionals have told me that it wasn’t my fault so anyone saying otherwise is absolutely wrong.”

ED! has contacted a rep for Stephen Bear for comment.