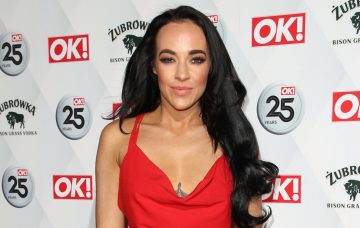 The oven was on too low!

Stephanie Davis accidentally poisoned her boyfriend with raw chicken after attempting to cook him a romantic meal.

The Hollyoaks actress, 25, showed off her cooking skills on Instagram on Wednesday but it wasn’t long before things went terribly wrong and her co-star boyfriend Owen Warner ended up vomiting in the toilet.

Steph first shared a post showing her prepping the meal before serving it up for her beau.

But minutes later, she shared a clip of the meal alongside the caption: “I cannot believe it… I cannot actually believe it! I cooked it for ages!!!! I’ve threw up. I tried.”

In the video, Owen is heard saying: “So Steph’s cooked us a lovely meal,” as she’s heard being sick in the background.

He added: “I’m halfway through mine and I peel back this and look,” as he pokes the uncooked meat with his knife.

“The chicken’s raw. You alright Steph?”

In another video, Steph explained what went wrong with her cooking.

She said: “So I just called my mum. It was because I had the oven on too low. I’ve been sick. Took me absolutely ages to cook that. I think Owen’s being sick now. I’ve told him to be sick. I tried though.”

She captioned the post: “Currently googling side effects of raw chicken. What a fail.”

Steph then posted a screenscrab of her WhatsApp conversation with her mum.

Her mum text her saying: “Just saw Insta! And it’s Bon appetite not Bon Appatite omg! And it looks raw as hell! How much did Owen eat? Surely not a whole fillet?”

Steph replied: “Oh god mum. Can it get any worse? I don’t feel well, keep thinking of when I chewed into it. Mum… he ate most of it. Will I be okay? Stomach’s in bits from vomiting!”

The actress then shared a snap of poor Owen with his head over the toilet.

She wrote: “Oh no. Sorry babe. Love you. #stephsnotcookingagain.”

Earlier this month, it was revealed that Steph and Owen – who plays Romeo Quinn in the soap – were an item.

It is believed ex Celebrity Big Brother contestant Steph has been single since her on-off relationship with Jeremy McConnell, the father of her son, ended last year.

A spokesperson told The Mirror: “They are in a relationship and they are very happy.”

And another TV insider is reported to have told The Sun Online that the couple seeing each other was already an open secret among soap colleagues, even though it is “early days” for the romance.

Read more: Hollyoaks’ Steph Davis ‘in talks’ to make her own TV show

The source is said to have added: “Steph is being really cautious and has wanted to keep their relationship out of the public eye.

“They make a really nice couple and all of their friends and co-stars have been really supportive. Everyone just wants Steph to be happy.”