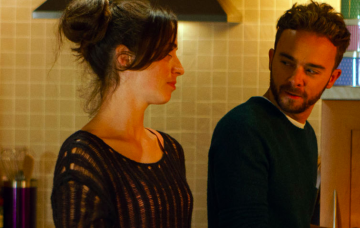 Another blow for him

One of Coronation Street’s best loved couples will be throughly tested in the aftermath of David Platt’s male rape storyline, Julia Goulding who plays Shona Ramsey, has warned.

The couple finally got together last year, overcoming the small inconvenience that Shona’s son murdered David’s wife, and have been loved up ever since.

Read more: Emmerdale’s Priya turns to a life of crime

But, of course, the path of true love never does run smoothly in Soap Land so it was only a matter of time before something happened to shake things up for them.

As viewers know that ‘something’ is David being drugged and raped by newcomer Josh, in upcoming episodes – if reports are to be believed, of course!

Julia has been talking about what the aftermath of the attack will mean for Shona and David.

Speaking on Lorraine, she said: “There’s lots of pushes and pulls and plenty of bumps along the way but that’s what makes it interesting. We can never be happy too long.”

The storyline has already received something of a backlash from fans on social media – with some even threatening to boycott the soap when it airs.

Julia went on to add: “We have a great research team at Corrie as ever, they’re gonna be handling this sensitively and I’m so excited to be a part of this storyline.

“It’s important to do this storyline to highlight it and get it out there and make it less taboo, and give people the opportunity to speak out.

Over the next few weeks, viewers will see David and Josh form a friendship as Josh helps David train for the charity boxing match.

Read more: Sally Lindsay reveals why she won’t be going back to Corrie

Corrie bosses have confirmed that the actual rape won’t be shown, but implied, and the plot will focus more on David’s reaction and how he copes in the aftermath.