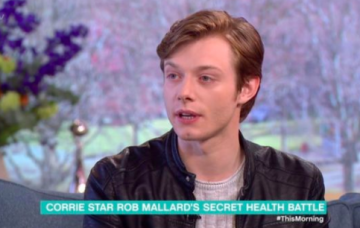 He spoke bravely on This Morning

Coronation Street actor Rob Mallard has bravely opened up about the secret health battle that he feared could cost him his acting career.

The star – who plays Daniel Osbourne in the ITV soap – spoke candidly on This Morning about living with a condition known as essential tremor and how he was ‘exposed’ last time he appeared on the show.

Read more: Ross Barton is devastated when doctors tell him they can’t help his scars in Emmerdale

Rob told Phil and Holly how he felt embarrassed after his appearance in January when rumours circulated that he was drunk on-screen.

Today he made the brave decision to address the condition – which is a neurological condition causing involuntary shaking.

He said: “[I felt] exposed more than anything. I’ve been aware of this for nearly 10 years. My solution was to hide and manage.

“Because of the job I’m in it can have a detrimental effect to being cast so I decided to keep a lid on it.

“Firstly I was incredibly embarrassed, then angry, then I started getting messages from people on Twitter saying ‘me too’.

“There’s been a spotlight thrown on me here so instead of ignoring it I could use it for something useful.”

He went on to say: “I didn’t have it from birth but I don’t remember not having it. I was about 14-years-old when I first started noticing it. Like most people it manifested in the hands. It can spread to the back of your head and the neck.

“It’s a progressive disease. By the time I’m 50 it could be in the voice box, down the spine, the arms. It could be quite debilitating.”

Fans took to Twitter to praise Rob for his brave and honest interview.

“Hope all the people and journalists who were quick to judge Rob Mallard on his last appearance on This Morning feel proud!” wrote one viewer.

Another added: “Well done for opening up.”

Hope all the people and journalists who were quick to judge @Rob_Mallard on his last appearance on #thismorning feel proud! #dontjudge

Well done for opening up.

Rob has played Ken Barlow’s grandson since 2016 and has been involved in some huge storylines including Who Pushed Ken, when it was revealed that Daniel had attacked his grandad and left him for dead after Ken meddled in his relationship with Sinead Tinker.

Read more: Corrie bosses planning for Fiz and Tyrone to be the new Jack and Vera (Credit: ITV)

Did you see Rob’s interview? Leave us a comment on our Facebook page @EntertainmentDailyFix and let us know what you think!