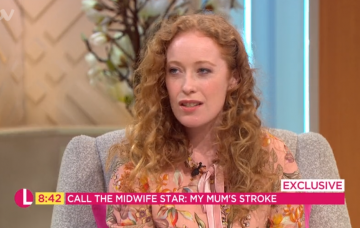 Call The Midwife star opens up about mum’s “traumatic” stroke

The incident happened while the actress was filming the series

Victoria, who plays Sister Winifred on the BBC series, revealed she was on the set of the programme when her mum was taken ill in 2015.

The actress, 35, told host Lorraine Kelly that the whole incident was “traumatic” and a “big life change.”

Speaking about the incident, Victoria explained: “[It was] totally out of the blue. I was on set when it happened.

“I saw this Bournemouth number and I said to my producer, ‘you’re going to have to take that, because something’s happened.'”

“They drove me down to the hospital and said, ‘look, the car will wait for you however long,'” she continued. “They would drive me back off set on a Friday night, pick me up, they were amazing.”

But, thankfully, Victoria said her mother is “doing much better” and she’s “got used to her new life and her disability.”

“It’s just finding workarounds,” she added. “She’s got an electric wheelchair now. She’s come to London to visit me on the train – that’s a massive deal.”

“I’d be leaving her thinking, if the carer doesn’t turn up, what would happen?” she said. “With the Stroke Association, I started working with them, I got more support.”

Speaking about her mum, Victoria said: “The reason my mum hasn’t been able to get much movement back is because she was on the floor for two and a half days.

“She used to volunteer at the hospital. So she was always out. I just thought she was away doing her thing. It’s just kind of a bit of a shock.”

Victoria also said that her mum will be able to attend her upcoming wedding to fiancé Paul Housden.

“I thought it was going to be a really good impetus,” she said. “Just because now you’re suddenly disabled it doesn’t mean you shouldn’t go on holiday. There’s a lot more stuff in place.

“There’s no way [I would have got married without her there].”

“Yes we are filming at the moment,” she said. “She’s [her character Sister Winifred] a good woman. I based her on my primary school teacher who was a nun as well.

“She’s a bit clumsy and gets frustrated.”

Are you looking forward to the Call The Midwife Christmas special? Leave us a comment on our Facebook page @EntertainmentDailyFix and let us know what you think!