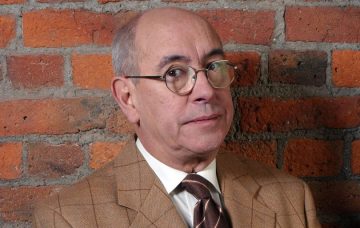 Doctors put him in an induced coma for three weeks

The actor, 78, has been off-screen for an extended period and has now opened up about the real reason why.

Malcolm, who plays fan favourite Norris Cole, says he is lucky to be alive after his terrifying illness.

Read more: Everything you need to know about Corrie’s Sean Tully

Speaking at an event at Blackpool Victoria Hospital to mark the 70th anniversary of the NHS, Malcolm said: “Most of December I was in an induced coma, in the care of these brilliant, wonderful people at the Cardiac Intensive Care Unit (CICU).

“Fortunately I didn’t realise how bad it was; I was dying. The cardiac team, […] simply saved my life.”

He explained that his GP had monitored his heart for a chest infection and had quickly realised something was seriously wrong.

The star reveals he had suffered a “silent heart attack”.

In quotes printed in the Blackpool Gazette, he went on to say: “I was informed by my doctor I had had at least one heart attack. I was sent to hospital, by emergency ambulance to Blackburn hospital and was there one night.

“While there I collapsed and was brought here to Blackpool Victoria – where I was operated on, in a procedure which was described by my surgeon as ‘groundbreaking’.

“The heart attack tore a hole in my heart, they operated and took a chance.”

Unbelievably, the damage was repaired with tissue taken from a cow.

Malcolm is now on the mend after three months in hospital.

The actor has been on an extended break from his role as nosy Norris since late last year, with the show only commenting at the time he was suffering from an unspecified illness.

Busybody shopkeeper Norris first appeared in Weatherfield in 1994. He last appeared on screen in December, but says he’s not sure if he’ll ever return.

He said: “People are asking if I’m returning to the Street, but that’s just not known yet. I may do, I may not. It depends on my recovery.”

Would you like to see Norris return to the cobbles? Leave us a comment on our Facebook page @EntertainmentDailyFix and let us know what you think!