Max Branning is having a pretty dreadful time at the moment – being blamed for daughter Abi’s death and being banned from her funeral.

He’s drinking too much, and moping around, and generally he’s in a right old state.

But fans are worried about the depressed dad for another reason.

Viewers have spotted that Mr Branning hasn’t changed his outfit for months – he’s been walking round wearing the same dirty garb.

“Safe to say that Max has been wearing the same outfit for about 5 months now,” said one concerned viewer.

“I wish Max would change his clothes, pretty sure he’s been walking around like that since Christmas,” said another. 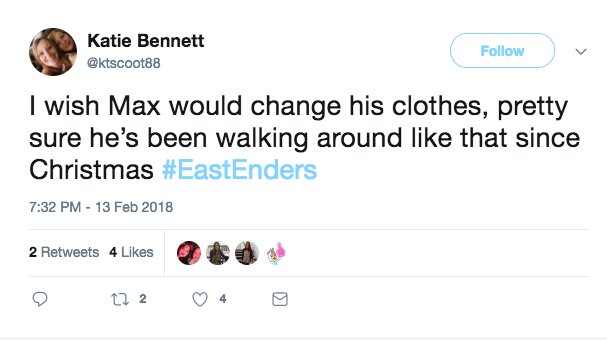 “Can Max please change his clothes and take off that ridiculous hoodie,” grumped another viewer.

Other fans were concerned about Mr Branning.

“Oh Max, you’ll feel better if you have a wash and change your clothes,” said one caring viewer.

“Max would feel so much better if he changed his clothes,” fretted another fan.

In last night’s episode Max was at rock bottom, with Lauren threatening to cut him off forever.

Kind-hearted Jay took pity on Mr Branning and took him home for a chat.

Max poured out his woes to Jay.

Jay proved a good shoulder to cry on for Max, as he listened to his sorrows and told him Abi had been the first girl he ever fell in love with.

And he told him a few home truths, as well, saying Abi’s attention seeking was all to do with her dad – and that she’d want him at her funeral.

Though he never mentioned the whole smelly clothes thing.

Perhaps Max should pay Karen a visit at the launderette?