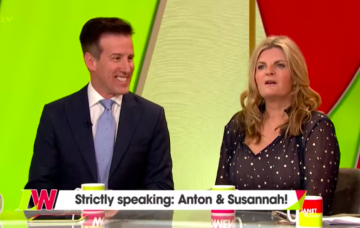 This weekend saw a sad end to Susannah Constantine’s Strictly story – but she’s opened up in a new interview about the lovely TV star who’s been helping her through the heartbreak.

The presenter appeared on Wednesday’s Loose Women, alongside her dance partner Anton du Beke, and paid a special thank you to host, Ruth Langsford, who, she said, has “really helped me through this whole thing.”

Opening up to the panel, which also included Stacey Solomon, Janet Street Porter and Jane Moore, Susannah confirmed: “It is gutting [to be out first]. I feel like I’ve been dumped by my boyfriend.”

She added it was the reason she’d had a haircut, to cheer herself up.

The 56-year-old tried to look on the bright side though, adding of her professional dance partner, Anton: “But I had three, four weeks with this lovely man. How lucky am I?”

The fashion journalist also credited Ruth – who was partnered with Anton, 52, in 2017 – for offering a huge amount of support.

Pointing to her new friend, Susannah said: “Ruth really helped me through this whole thing, we spoke almost every day.”

Susannah and Anton were bottom of the leaderboard for two weeks running and received harsh criticism from the judges.

Craig Revel-Horwood told her: “Even the smoke couldn’t cover that complete dance disaster.”

While judge Bruno Tonioli added: “I’m stunned. I think, Anton, you could’ve got better movement out of a lamppost. You were just dragging her and she was trying desperately to catch up.”

She admitted that the main reason she was upset was because: “I felt like I’d let Anton down.”

But father-of-twins Anton dismissed this, telling her: “It’s a shared experience with someone.”

He also laughed off rumours that he had quit the show and thrown a tantrum, saying: “There’s no truth in any of that. [We were] disappointed, naturally. [We] had a bit of a mope.”

It followed a nail-biting first elimination on Sunday.

We said goodbye to Susannah after a dance-off with Lee Ryan. It was a shock for the the Blue star, who received a respectable 26 points for his Jive to Blue Suede Shoes by Elvis Presley.

The judges chose to save Lee, meaning Susannah was eliminated.

We’re sad she’s gone, but glad she’s got Ruth to offer support. We all need a friend like Ruth, right?

Are you sad to see Susannah go? Leave us a comment on our Facebook page @EntertainmentDailyFix and let us know what you think.