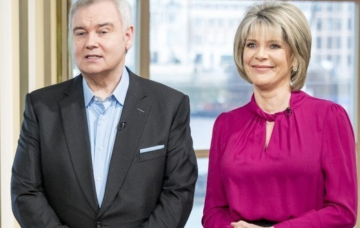 But was the move to protect the viewer or the agony aunt?

This Morning viewers were left scratching their heads today after the show’s agony aunt seemed to push someone out of her way during a live link to the studio.

At the start of Friday’s episode, Eamonn Holmes and Ruth Langsford crossed to Deidre Saunders backstage to chat about her phone-in topic.

What viewers saw, however, was Deidre shoving an unknown person out of the way right in the middle of the segment!

If you've ever wondered who's really in charge at @thismorning…

Viewers of the TV show were quick to poke fun at Deidre’s lighting quick reflex, and how she reacted to the ‘intruder’.

Read more: Which secret did Philip Schofield let slip on his return to This Morning?

One joked: “Deidre is nothing but a heartless thug!”

Another quipped: “I wouldn’t want to mess with Deidre ever!” 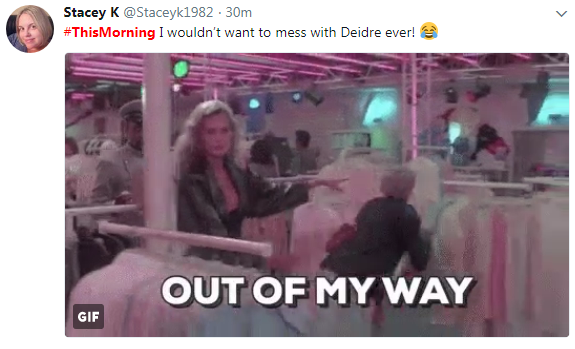 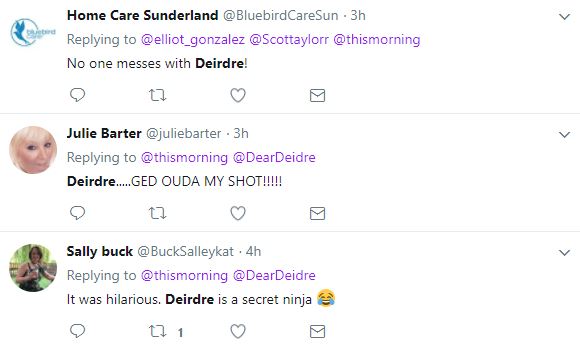 The agony aunt was there to talk to the duo about divorce and break-ups… happy thoughts for the beginning of a new year, when the unexpected screen invasion happened.

It turns out that the invader was in fact called Catherine, and is a member of the This Morning team, she simply hadn’t realised they were filming when she made the blunder.

Later on in the show, Eamonn and Ruth gave viewers an explanation of exactly what had happened.

They explained that the crew member had unwittingly walked across the shot, and that Deidre had simply just pushed her out of the way to stop her blocking the view.

Eamonn said: “Earlier some of you noticed that Deidre attacked – and that was live, she wasn’t re-enacting – she attacked a member of staff there wilfully, called Catherine.”

The show later featured Deidre with Catherine to prove there were no hard feelings between the pair.

As Deidre put her arm around the lady, she said: “I want to make it clear I was trying to save Catherine, not actually karate chop her.”

Thank goodness for that!