Amused Stacey Solomon has taken her current decluttering spree to the extreme - after using shower curtain rings to hang up her CRISP BAGS.

Stacey, 30, has spent the past few weeks splashing out on storage boxes and jars before overhauling her cupboards at home. 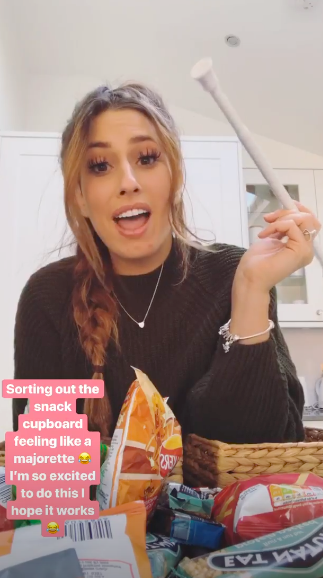 But even she was left in stitches today after coming up with a hack to restore some order to her messy snack cupboard.

Taking to her Instagram Stories, Stacey told her followers that she had "a load of spare tension rods" hanging around, so bought a big bag of shower curtain rings to go with them. 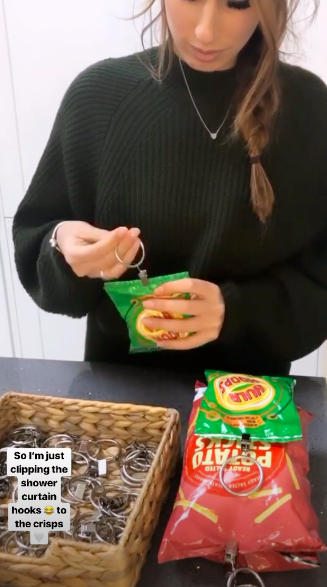 She clipped her crisp bags to the hooks... (Credit: Instagram/ @staceysolomon)

The Loose Women star then painstakingly clipped individual packets of crisps onto the rings before hanging them on the rods...in colour order.

Showing off her finished cupboard, Stacey gave herself a little cheer and declared: "Snack cupboard, complete!" 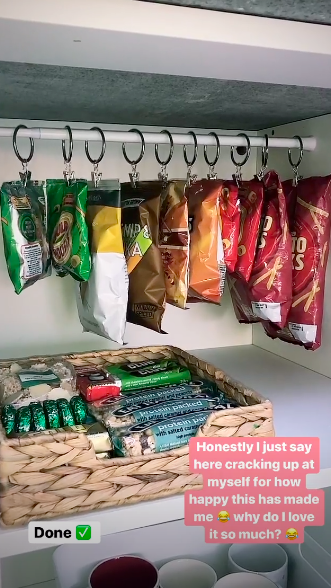 ...before hanging them on the rod! (Credit: Instagram/ @staceysolomon)

Laughing almost uncontrollably, she added: "I really don't know why this makes me so happy...but it does!"

Giddy with excitement, Stacey then shared a clip of herself emerging from her under sink cupboard, which now features a rail of hanging dishcloths and sponges.

"The possibilities are endless," she giggled.

I haven’t had a picture with the four of us in so long. Mostly because the older boys are far to cool for pictures with mummy 😂 But tonight much to my surprise they jumped in on a picture Joe was taking of me and Rex and even better than that, just by chance we all chose pyjamas that were a shade of grey, which in my eyes is matching and I promise I had nothing to do with it 😂 With that and organising my spice cupboard Thursdays don’t get much better 😂Hope you’ve all had a lovely day! 🤍 Lots of love 🤍

She later went back onto her stories to admit she'd had a few messages asking her if she was okay.

Some had even told her the crisp cupboard "isn't normal".

But she cheerfully responded with: "Some people meditate, some people do yoga... some people organise their crisps!"

We are delighted to see mum-of-three Stacey so happy, especially as she was forced to admit this week that baby son Rex's first word is "dada". Oops!