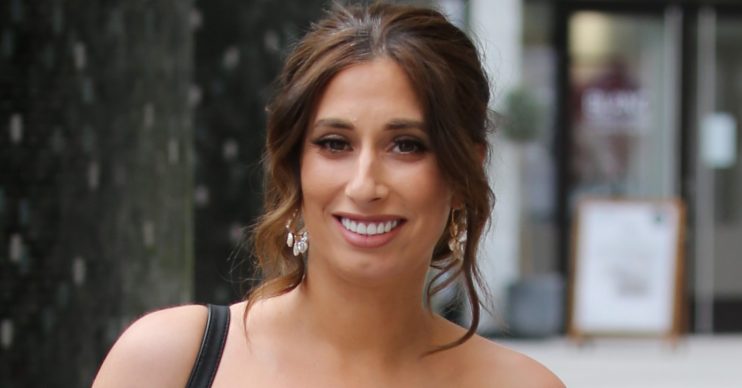 She'd invited fans on social media to 'spot the tooth'

TV star Stacey Solomon has vowed to “give up” replying to people on social media after she came under fire for her choices as a parent.

The 30-year-old Loose Women favourite admitted she felt ‘really down’ after critics jumped on her for her views about weaning.

Sharing adorable snaps of baby Rex on Instagram, Stacey revealed her five-month-old has developed a tooth.

She cheerily captioned the images: “I can’t believe it… actually I can, we are quite a teethy family.

“Can you see it? I feel like I can really see it but it probably doesn’t look like anything is there.”

Stacey also admitted she felt “a little bit emotional” because she felt like her little one is growing quickly.

I’m also really excited to put that tooth to work and start giving him solids.

She continued: “But I’m also really excited to put that tooth to work and start giving him solids, I think I’ll give it a go this weekend.”

Thousands of well wishers sent her their best in rapid order, with many commenting they could indeed spot Rex’s new gnasher.

Read more: UK weather: Month’s worth of rain predicted to fall in just over a DAY

But among the positive comments were many strident remarks that insisted Stacey was raising her child ‘incorrectly’.

A clearly upset Stacey later posted a general reply on her Instagram Stories, clarifying her caption – but also making it clear she is responsible for Rex, not her followers.

She wrote in the exasperated statement: “I said: ‘I think I might give weaning a go this weekend.’

“Some people seem to think that means I’m going to feed my baby if he’s not ready… no.

“I always have and always will get the right advice and then make my decision. Because that’s exactly what it is – my decision.

“You can rest assured that I will never do anything that compromises my baby. Everything I ever do is in his best interest.

“Please think about that you’re saying because there are lots of women out there who made their own decisions for whatever reasons and you’re making them feel bad.

“We already feel guilty enough, we don’t need any more to add to the guilt train.”

She also shared a short selfie clip of her cradling Rex and explained she would be consulting a nutritionist as part of her plans for Rex to ensure his weaning is a “fun, safe experience”.

Stacey reflected:”‘‘Toothgate’ has really got me down.

“I give up. I’m going to stop replying to people. I only wanted to share a picture of his tooth because I was really, really proud of it.”

She managed to joke about the negative reactions she has received: “It was like I’d said I was going to take him to KFC for a Bargain Bucket!”