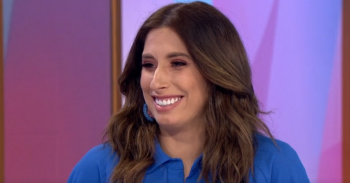 Posting the snap on Instagram, Stacey told her followers she might be carrying a “Furby” and asked if anyone else grew hair in new places while they were pregnant.

The photo was shown on today’s Loose Women and host Ruth shared some interesting medical info.

She told the others: “It is very common, okay, so you don’t have to worry about it. It’s increased levels of hormones. Estrogen, in particular, can cause hair to grow in unexpected areas.”

Ruth added that the hair growth will likely return to normal within six months after the baby’s born and said it offers a potential clue on the gender.

Ruth explained: “You know that old wives’ tale. They say if you’ve got a hairy belly, it means you’re carrying a boy.”

Stacey’s remained tight-lipped regarding the gender of her child, although earlier this month she admitted to finding out because she was “impatient” to know.

“We’re not going to tell anyone because it’s not important, but we are excited.”

She was chatting about Stacey’s pregnancy during a video interview with Hello! magazine and used the words “she” and “her” when referring to the impending arrival.

Coleen was discussing throwing a Loose Women baby shower when she said: “Any excuse to have a party, and any excuse where there’s a baby involved. She… that child, is going to have so many aunties, she won’t know what to do with herself.”

Stacey hasn’t revealed what she’s going to call her unborn baby yet, but earlier this month she discussed plans for the child to have a double-barrelled surname.

She also joked that she might pick Vinegar as a first name since it’s what she’s been craving. Vinegar Swash-Solomon!

Stacey already has two boys, Zachary, 11 and Leighton, six, from a previous relationship, while Joe has an 11-year-old son called Harry.

The pair announced the pregnancy, their first together, in February.