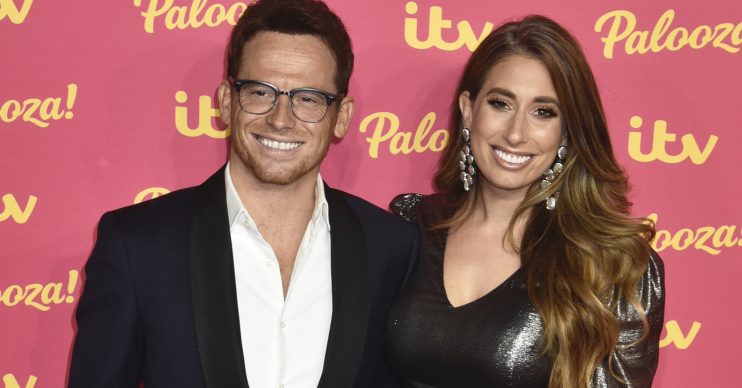 Stacey was delighted, however

Former I’m A Celebrity Extra Camp host and current Dancing On Ice contestant Joe Swash was left open-mouthed and ‘terrified’ when an Instagram random prediction quiz said he would get married this year.

Joe, 38, was left open-mouthed as the word married appeared above his head during the social media game.

Partner Stacey Solomon was seen punching the air and giggling in a Instagram clip as the word came up.

Joe and Loose Women panelist Stacey, 30, were enjoying a cosy Friday night in when they began horsing around with the Insta quiz.

The prediction quizzes are sweeping the country, letting users see what type of cheese or favourite movie character they most ‘resemble’.

But in this one, it suggested to users what would happen to them in 2020.

As the options whirled around, it stopped on ‘married’.

He’s just walked through the door and he’s fuming.

Stacey captioned her Instastory, “He’s just walked through the door and he’s fuming”.

And, when Joe’s face dropped, she giggled, “Yes! The best one ever!”

Joe and mum-of-four Stacey caused a meltdown in November 2019 when fans were convinced they secretly got married in the Maldives.

Fans responded to a family photo posted to Instagram, with one saying: “Did you get married?!”

“Anyone else secretly hoping for a surprise wedding?” another asked.

The couple have been together since 2015.