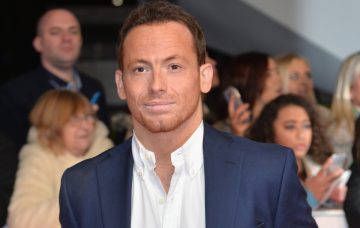 The Extra Camp host will miss his girlfriend

Joe Swash has revealed his sadness at leaving girlfriend Stacey Solomon behind as he heads off to Australia for I’m A  Celebrity… Get Me Out Of Here!

The I’m A Celeb: Extra Camp host shared a sweet snap of him with Stacey and one of her sons and wrote: “Not long now til I have to leave this lot I’m going to miss these guys.”

The former EastEnders actor will be spending the next month Down Under to co-host the spin-off show with Gogglebox star Scarlett Moffatt and comedian Joel Dommett.

After 36-year-old Joe’s sentimental post, Loose Woman Stacey, 29, wrote her own hilarious message for her boyfriend.

Despite admitting she would really miss him, she said she is happy she won’t have to listen to his snoring every night!

Alongside a family shot of her, Joe and her children Zachary, ten, and six-year-old Leighton, she posted: “And he’s off to the Ozzy Outback 😭😭😭😭 We are gonna miss you so much @realjoeswashy but we can’t wait to watch you doing what you do best. No fun and lots of trials please @imacelebrity @itv2 😂😂 Honestly though, our home will feel empty without you bub. Except for the bed, the bed will feel wonderfully spacious and snore free.”

They have only just got used to living under the same roof. Last month, Former I’m A Celeb winner Stacey moved in with Joe after two years of dating, and they have been keeping fans updated with their new life together.

Stacey shared her excitement about their big move on her Birthday on 4 October.

She told fans on Instagram: “Happy birthday to me 😬 yaaay. Was imagining being surrounded by thousands of pink balloons when I woke up on a four poster bed but I’m actually sooo much happier to be waking up on a mattress on the floor surrounded by brown boxes because we are about to move in together and blend our lives together which is the best birthday present I could have ever wish for.”

Stacey is mum to sons Zachary, ten, and Leighton, six, while Joe is dad to son Harry, 11.

Joe found himself in a bit of predicament before he even began his role on I’m A Celeb this year.

Speaking on This Morning last month, he admitted he had played a part in this year’s celebrity names leaking after telling his Nan about the line-up!

He explained: “My nan lives in Norfolk and she went to the local coffee shop, and some geezer bumped into her and started asking questions.

“She told this fella everything and he worked for the Norfolk Gazette and it whittled down and they found out it was me.”

Joe’s co-host, and Jungle Queen of 2016, Scarlett, 28, also shared her excitement about flying back out to Oz. And she has offered some advice for the new campmates…

Next to a pic of her in jungle get-up, she wrote on Instagram: “2 years ago today eeeeek!! So excited for extra camp now!! Good luck to the new camp mates if I can give you any advice it’s enjoy ever second & grab yourself a hammock they’re much comfier than the beds.”

Joe, Scarlett and Joel will also be joined by a new face in Australia. This Morning’s Holly Willoughby will be replacing Ant McPartlin to host the main show with Declan Donnelly.

Are you looking forward to the new series of I’m A Celeb? Let us know what you think by leaving us a comment on our Facebook page @EntertainmentDailyFix!