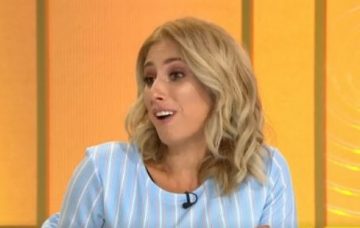 Poor Stacey had her typos pointed out in romantic text to boyfriend!

Poor Stacey Solomon tried to do something romantic for Joe Swash, but ended up having all her spelling errors pointed out on live TV!

The 28-year-old set her fellow Loose Women panellists a challenge on Wednesday, asking them to text a love letter to someone special.

Stacey, obviously, chose to text a message to boyfriend Joe Swash, which was then read out by Janet Street-Porter.

Janet read: “‘Dear Joe, I thought I would right’… spelling mistake right there! Right [not write]. I love you Stacey, but this is absolute cack.”

She continued to read Stacey’s letter: “‘I’ll never forget the first time I met you and you practically begged me to come Australia because you had quite obviously fallen in love with me. I don’t blame you. I’m an absolute catch.'”

She then continued to read Stacey’s letter: “‘Low and behold, much to my dismay and apparent resistance, I quickly realised I liked you to’.”

Janet broke off again to point out: “To. Not too. Another spelling mistake!”

Stacey’s letter concluded: “Thus the beginning of us and I can’t think of a better person to have accidentally and unwilling fallen in love with. You are, without a doubt, the most patient and accepting person I know.”

Stacey laughed: “I feel like you’re mocking me, Janet!”

But Janet replied: “It’s very lovely. Next time you want to do a love letter…”

Unfortunately for viewers, Joe didn’t see the message in time to send Stacey a response live on air, but hopefully she’ll keep us updated on social media as to his reply!

Meanwhile, Ruth Langsford also failed to get a message from husband Eamonn Holmes, but both Janet and guest panellist Catherine Tyldesley got responses from the texts they sent.

The whole challenge was sparked by a debate on whether anyone still writes love letters to each other in modern days.

Stacey said she believed people do still write love letters, they’re just done as emails or texts these day, rather than using paper and ink.

Do you still write ‘love letters’ or ‘love texts’ to your loved ones? Leave us a comment on our Facebook page @EntertainmentDailyFix and let us know what you think!