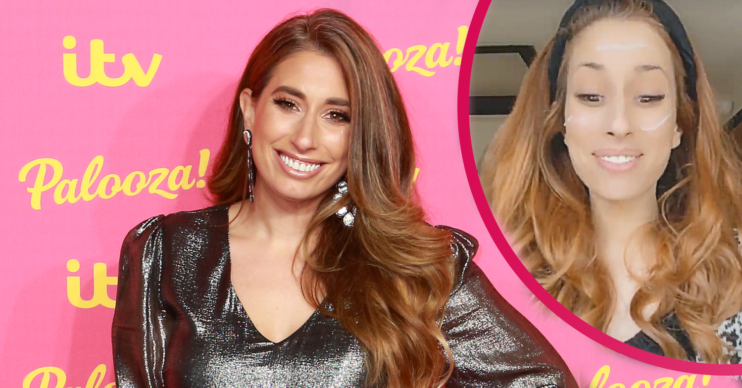 They had to say goodbye to Mitzy

Stacey Solomon has revealed that she and her family have a new arrival – a ‘wild’ cat the previous owner of her new house cared for.

However, they had to leave their old cat behind.

But a new arrival means that the family have a ready-made pet.

What did Stacey Solomon say about the new cat?

Taking to her Instagram Stories, Stacey showed a cute image of youngster Rex playing with the new black cat.

She captioned the image: “We wish we could have brought Mitzy here but he became too settled and at home with his new family down the road, who also love him and wanted to take him on.

“So we thought it would have been cruel to bring him out to the middle of nowhere.

“But these things happen in mysterious ways.”

She continued: “Because the lady who lived here before said she took in a wild cat and couldn’t bring him with her.

“So she left some food and asked if we would take care of him if he ever came back.

What else did Stacey say?

After fans sent her messages asking why the cat was wild, Stacey took to her Stories again to explain.

“Lots of you are like ‘Stace that cat doesn’t look very wild’.

He’s not wild now, the lady had been feeding him and cuddling him for years…

“He’s not wild now, the lady had been feeding him and cuddling him for years…

“But when she tried to catch him he got scared and ran away.”

She went on to say it was so nice to see him that morning, and that she hoped he liked the new family living at the house.

Where has Stacey moved to?

She told fans on Instagram: “Soooo… For a very long time Joe and me have been searching for our forever home, further from the city and closer to our family…

Read more: Stacey Solomon fears new home has turned her into a ‘show-off’ as she posts new pics

“A few months ago we saw a house that we couldn’t even believe was on the market and in the same budget as our house now.”