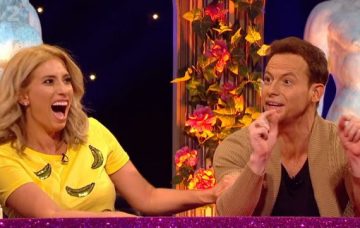 These two are just quality entertainment!

Stacey Solomon has admitted she’d be “shocked and horrified” if boyfriend Joe Swash ever sent her an X-rated photo.

Keith asked Joe if he’d ever sent Stacey a nude picture of himself, to which Joe said: “I don’t think I have.”

And that’s a good thing, as Stacey replied: “I’d be shocked and horrified!”

Stacey then left Joe red-faced by revealing she buys all his tanning supplies for him, although Joe instantly claimed that wasn’t true.

He told Keith: “Stacey does this thing. I want to put it out there! She’ll invent a story and then trick me into thinking a story is true. One day she told me I was 37 and for a whole day I thought 30 [bleeping] 7! I’m 36!”

Stacey was in hysterics but insisted that she does buy Joe’s tanning supplies!

Stacey revealed the duo like to share baths, but only “until he wees in it and then I run out. I have to properly have no bubbles so I can make sure.”

An embarrassed Joe denied that, but Keith reckoned he looked guilty!

Stacey then took it one step further by declaring: “When I’m in the bath he comes and does a poo.”

She clarified she meant in the toilet while she’s bathing, not doing it in the bath!

That shocked Holly, who told Joe that wasn’t allowed!

But Joe hit back: “Stacey does exactly the same.”

Plenty of fans, however, found it hilarious and lavished praise on Stacey and Joe’s obvious connection.

As always, Holly and Fearne Cotton were team captains.

What do you think of Stacey and Joe’s confessions? Leave us a comment on our Facebook page @EntertainmentDailyFix and let us know what you think!