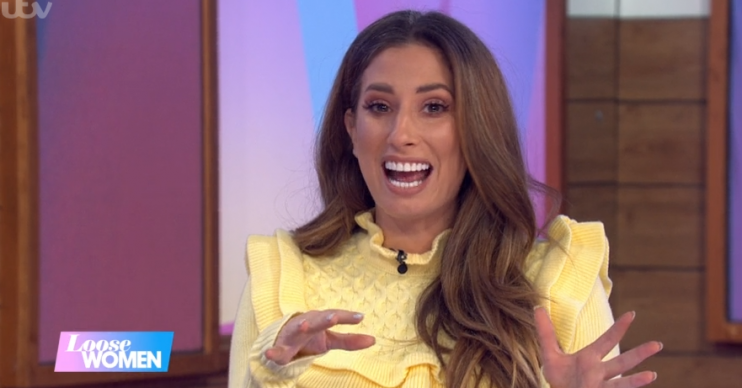 She has three sons - one with Joe

TV’s Stacey Solomon’s son asked her boyfriend Joe Swash if he considers him “another son”.

The 30-year-old singer has three sons – Zachary, 11, and Leighton, seven, from previous relationships and eight-month-old tot Rex with boyfriend Joe.

She has revealed that whilst Rex is her only child with Joe, her other children still consider the TV star to be a father figure.

Speaking about a conversation one of her sons had with Joe recently on today’s Loose Women, she said: “He said: ‘I know why he was so excited to go to the café this morning.’

He was obviously asking if we love all of our children the same because those questions come up in his head, and it was so nice.

“He was obviously asking if we love all of our children the same because those questions come up in his head, and it was so nice.”

And upon hearing the sweet conversation, Stacey was left in tears.

My dream night. Cuddles on the sofa watching telly, eating anything within arms reach. 🖤 I’ve really missed this, this week. It’s been one of those weeks where you feel like you leave before they wake up and get home after they’ve fallen asleep which makes me feel a bit guilty sometimes… But not going to let the guilt win, I’m here now so I’m making the most of being home with all of them doing absolutely nothing 😊🖤 Happy Friday hope you’ve all had a lovely week and here’s to the weekend 🖤

The former X Factor star was quick to add that Joe – who is also father to 12-year-old son Harry from his relationship with Emma Sophocleous – isn’t replacing her sons’ biological fathers, but said the conversation has helped ease some of the tension of being a “blended family”.

She explained during an appearance on Loose Women on Thursday: “He’s got an amazing dad, but it’s always difficult having a blended family and hoping everyone around you loves you the same.

“It’s more about is being a family. We push we’ve got a blended family – mummy, Joe daddy, everyone – but it’s so worth it.

“It’s not easy having the different dynamics in a family, so when you do get that moment you think, ‘Thank God, we’ve got it right.'”

Stacey and Joe welcomed their first child together, son Rex, in May last year.