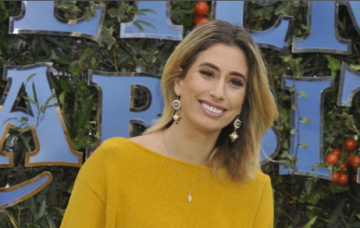 Stacey Solomon’s fame preceded her as she arrived in Los Angeles and was greeted by the paparazzi!

The Loose Women star has travelled to California for her sister’s hen do and had assumed the waiting snappers were there to catch an image of a Hollywood A lister.

Taking to her Instagram stories to tell her fans what happened, the mother-of-two said: “We’ve arrived in LA for my sister’s hen do, really exciting.

“There was a photographer at the airport and I just assumed someone really cool was coming out of the airport but then he walked past and said, ‘hi Stacey, thanks for the pictures.'”

She added as the group travelled in a taxi: “I was like ‘OMG, look at the state of me!’ Not that I care because I have put worse up on my Instagram but I’m not even wearing a bra and my breast was tucked into trousers at the time I was waiting for the taxi.

“My friends have also pointed out that I have the airport meal all down my chest from the flight so there will probably be stories tomorrow, ‘Stacey worse for wear as she heads out of LAX!'”

Later, the 28-year-old updated her story again as she headed out all dressed up with her fellow hens.

However, they weren’t in a bar or at a club but a pharmacy!

Stacey revealed: “I can’t take my friend anywhere, we’re in the local pharmacy – or drug store – and she’s so happy to have found birthday cards!”

Stacey’s sister, Gemma, is soon to tie the knot and it seems to have got her sibling thinking about her own wedding day too!

On last week’s Loose Women, Stacey admitted it is something she and her boyfriend, former EastEnders actor Joe Swash, have talked about.

So Stacey could be going on another hen do soon – her own!

Would you like to see Stacey and Joe tie the knot? Leave us a comment on our Facebook page @EntertainmentDailyFix and let us know what you think!