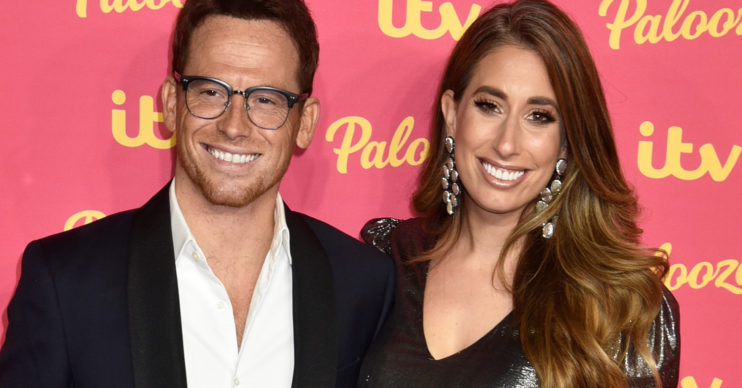 The Loose Women star reassured fans the couple are still together

Earlier this week, the star said she was taking a break from Instagram for the day due to “personal reasons”.

However, some fans feared her comment meant she and Joe had split.

Yesterday, the Loose Women star returned to work to pre-record some shows with safety measures in place before taking to Instagram to set the record straight.

Addressing ‘these strange, scary and emotional times’ she reassured fans that her and Joe are still very much together.

Stacey wrote: “‘Personal reasons’ isn’t code for divorce (we aren’t married you know what I mean) it just means some things are happening in our lives personally at the moment.

Read more: Stacey Solomon films herself while sitting on the toilet

Continuing, she added: “We love you all and hope you’re all OK.

“These are really strange, scary and emotional times and it’s not easy for anyone.”

And, showing fans a glimpse of the fun relationship they have come to love about Stacey and Joe, she added: “P.S. me and Hoe [Joe’s nickname] laughed so much trying to take this picture because our hands are so awkward.

“He wanted me to hide his nails too which was impossible.”

Stacey also shared a sweet video of Joe presenting her with dinner after a hard day at work.

She wrote: “Hoe came through with my after work dinner surprise.”

It looked like Joe had come up trumps with an Indian takeaway to keep his girlfriend happy.

Split rumours started after worried fans noticed Joe had been absent from Stacey’s social media updates since April 23 when she posted a cute picture of them sharing a smooch, calling Joe: “My love, my life.”

🤍 When I met you I found me 🤍 I love being silly with you. My S Club loving, dishwasher shoving man. My love, my life, my Hoe 😂🤍 To the moon and back @realjoeswashy 🤍Hope you’re all ok today 🤍 No matter what has happened this week, never forget, you are enough…. We will be out the front soon Clapping for our carers at 8 as always 🤍 we love you, and can’t thank you enough 🤍

How did the rumours start?

On Monday she ‘quit social media’ before returning on Tuesday when she tried to reassure fans by writing: “Lots going on here at the moment but all of the boys are safe and well, which we are so grateful for.”

She then posted updates of her sons as they celebrated Leighton’s eighth birthday but Joe was nowhere to be seen.

Read more: Stacey Solomon says she’s ‘on the brink of tears all the time’

🤍 Happy Birthday Leighton 🤍 I haven’t managed to get a picture of all three of them in so long it’s melting my heart 😭 My world 🌍 8 years old today pickle, how did this happen? 🥺 we love you to the moon and back Leighton… Now time for radish & chocolate cheesecake in mummy’s bed, watching your favourite films (I honestly can’t believe I agreed to this, must have been the lockdown birthday guilt)😂 I cant wait to spend the night rolling around in the radishes they pick off and hide under the sheets 😂 I hope you’re all ok, thinking of you always 🤍

Worried fans got in touch to ask whether the couple were having problems.

“Can you post a pic of Joe to put our minds at ease?” one asked, while another commented: “Beautiful… Where’s Joe?”

A third added: “Hope Joe is well as haven’t seen him on posts for past few days. Stay safe.”