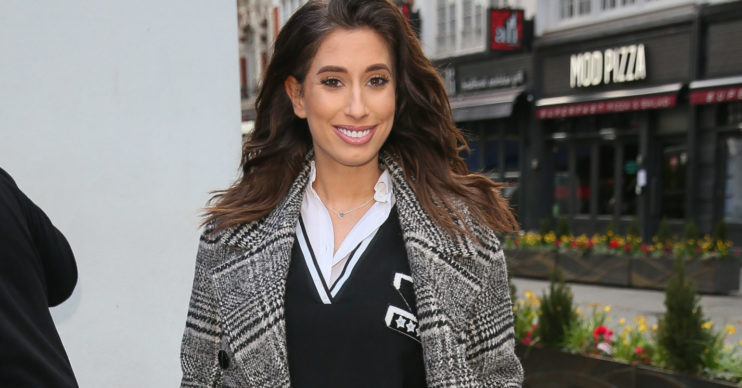 TV’s Stacey Solomon has shocked followers after sharing her rather unusual way of eating chicken nuggets.

The 30-year-old presenter often uses her social media platform to share her simple life hacks with fans – but her latest has left some completely undecided.

Following a trip to a crazy golf course with boyfriend Joe Swash and her sons, Stacey revealed the family had stopped off at their local McDonald’s.

Sharing the moment with her Instagram followers, the mum-of-three appeared delighted as she tucked into the fast food treat.

She said: “Our McDonald’s has opened too so we drove through on the way back. I got over excited and ordered a filet o fish and chicken nuggets.

“Does anyone else eat their nuggets skin first and save the chicken till the end? Please tell me there’s others out there?”

Stacey then went on to share a snap of her freshly peeled nuggets.

She added: “They look gross but they taste better this way.”

Fans were left shocked by her unusual habit, with one writing: “Very concerned about Stacey Solomon after just seeing how she eats her chicken nuggets!!”

While another seemingly agreed with Stacey’s method, saying: “Stacey Solomon and I eat McDonald’s chicken nuggets the same way, always knew we could be besties.”

Very concerned about @StaceySolomon after just seeing how she eats her chicken nuggets!!

Stacey previously served up her own homemade McDonald’s for her sons back in April.

The TV personality explained that she would usually take Zachary, 12, and Leighton, eight, out for food to celebrate their last day of school.

Read more: Loose Women cut to 30 minutes for rest of the week due to horse racing

However, as the fast food restaurant was closed due to coronavirus, she had to improvise and make her own at home.

Stacey used templates to make boxes before adding in her homemade chips and chicken nuggets.

Lockdown hasn’t been completely plain-sailing for Stacey and her family.

Earlier this week, the TV star admitted that spending much more time at home with her partner Joe, 38, has not been “all roses.”

In a chat with Metro, Joe said it was “so nice” to be at home so much after his stint on Dancing On Ice, which ended just before the UK’s lockdown came into effect.

He explained: “These couple of months have been so nice to be at home with the boys, with little Rex. It’s been so nice and we’re just trying to embrace it as much as we possibly can.”

But Stacey cut in and told the newspaper: “It’s important to say that it’s not all roses, it’s not easy… apparently I crunch [crisps] too loud.”

Joe admitted that there are things the couple “bicker” about. But he insisted it’s because they “love each other and [are] under each other’s feet”.