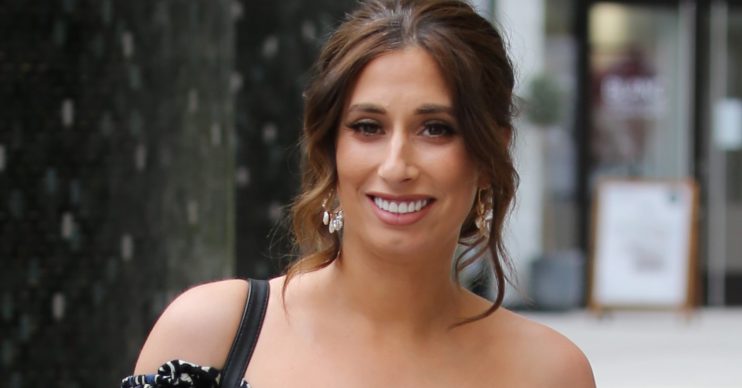 It's quite an unusual name!

The 29-year-old star, who gave birth a month early on May 23, posted an adorable pic of her newborn in a soft cradle. Laying next to him was big brother Leighton, seven.

The Loose Women star also revealed the cute name she now has for her sons, captioning her snap with: “My onions.”

The funny moniker came after Stacey, who also has 11-year-old Zachary, was spending time with Leighton and his new sibling.

In an Instagram video, Leighton made an adorable observation about his new brother.

Stacey chuckled and agreed, adding: “He does look like a little onion.”

The mum-of-three also revealed to fans today that she got dressed and washed her hair for the first time in days.

Sharing a smiley clip to Instagram, she told her followers: “Look at me. I got dressed. I washed my hair. I put mascara on!”

She was thrilled that she managed to find some time for herself amid newborn duties.

The star has been really honest about all that comes with having a new baby.

At the weekend, Stacey admitted her first week with her little one has been “interesting.”

She said that while she is “so grateful” for her new addition, it has all been “rosey.”

Stacey, who has had her first child with boyfriend Joe Swash, admitted on Instagram: “Hormone surges + really struggling to breastfeed + no sleep what so ever + engorged boobs + cracked nipples + absolutely anything as minuscule as somebody kissing my babies head = total meltdown.”

Today is a smiley day 😬 it’s been an interesting week. But it feels like the fog is lifting and I’m coming out of the fuzz. I’m so grateful to have our baby boy with us and be surrounded by my incredible family – my biggest privilege. But it doesn’t mean it’s been all rosey and glossy. Hormone surges + really struggling to breastfeed + no sleep what so ever + engorged boobs + cracked nipples + absolutely anything as minuscule as somebody kissing my babies head = total meltdown. I’ve found myself spontaneously uncontrollably sobbing into my mums arms, at least twice every day. Then I feel guilty that I’m not “enjoying every second” like everyone tells you too because it passes by so quickly (and it does, my eldest is 11 and I feel like I just blinked and that happened). But sometimes I’m just not in control of my emotions, and I can’t feel guilty about having sad points it’s counter productive. I’m really feeling happy today which is amazing, but I’m ready to accept any sobbing or sadness that sneaks up on me at any point. If it doesn’t hallelujah, but if it does I’m no less of a mother for feeling that way. And to anyone else feeling or who has felt that way, don’t ever let those feelings make you feel that you weren’t good enough, you were and you are. Its ok not to be ok. Also I want to say thank you to the amazing NHS services that we have received over the last 7 days… Queens Hospital Romford, all of the nurses, midwives and paediatricians. Our community midwives, and the breastfeeding specialist who literally MILKED me for hours trying to bring my milk down from under my chest and armpits, and the Perinatal Parent Infant Mental Health Services in our area who have been so attentive and always there if we need them. 💙 Thinking of all of those who don’t have a support system around them. If you need someone to talk to there are people out there… please don’t hesitate to reach out. @pandas_uk @mindcharity 💙

She told her followers: “Its ok not to be ok.

“If you need someone to talk to there are people out there… please don’t hesitate to reach out. @pandas_uk @mindcharity 💙.”

Leave us a comment on Facebook page @EntertainmentDailyFix and let us know what you think of this story.