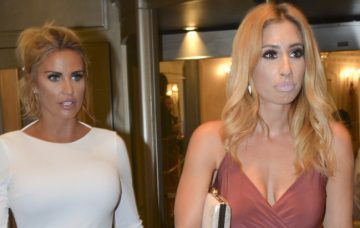 Katie is currently seeking treatment in rehab for PTSD

Stacey Solomon has sent her support to Loose Women colleague Katie Price in a new interview.

The 29-year-old said everyone involved with the show “really cares” about Katie, 40, and hope she’s doing well following her decision to seek treatment in rehab.

Stacey told the new issue of Closer magazine: “We’re sending Katie our best wishes. We really care about her and hope that she’s well.”

Katie made the decision to seek help for post-traumatic stress disorder at the end of last month.

She’s had a highly-publicised and difficult few months that has included the breakdown of her third marriage and her mum’s terminal illness.

Ruth Langsford said on the ITV daytime programme: “Now you may have seen in the papers at the weekend that it’s been reported Katie Price, close friend of this show, obviously, has had a few personal problems over the last few months and has checked into rehab this weekend to be treated for post traumatic stress disorder.

Katie’s mum Amy confirmed her daughter would be entering rehab in September.

Look at my mum all glammed up ❤️ @fern_makeup @carlbembridgehair