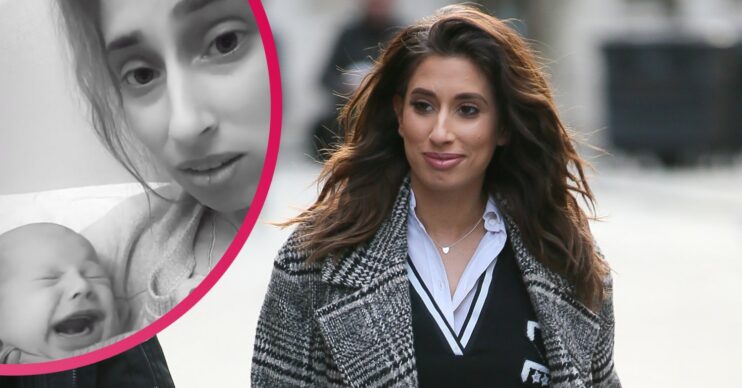 Stacey Solomon has admitted her ‘sadness’ as she struggles with exhaustion following the arrival of her baby daughter Rose.

The Loose Women star, 32, gave birth to baby Rose six weeks ago but admits the sleepless nights are getting her down.

Stacey has told fans she is “sad”, as she is too shattered to venture out and enjoy her maternity lave.

This comes after she was captured falling asleep upright by her fiancé Joe Swash.

Stacey Solomon and baby Rose ‘back in bed again’

Taking to Instagram, Stacey filmed herself and baby Rose on Friday night as they cuddled in bed together.

Chomping on some chocolate, she told her 4.8 million followers: “And we’re back in bed again. Shock horror. I am as tired as I look – I look like a small boy.

“I’ve just got no energy. I had so many plans for my maternity leave and can’t wait to get some energy back and do all the stuff I imagined we’d be doing.

“All the Christmas markets…”

Rose then began to cry, so Stacey finished her post with a written caption.

It said: “I feel a bit sad that it’s flying by and the days are so short and I’m not doing anything because I’m so tired.

“Sounds so silly, I know. I think it’s just because I’m more than halfway through and I’m feeling like I don’t want it to be over.”

Lifting the mood, Stacey added: “Rose is like, ‘I don’t care where we go as long as those boobs come with us’.”

When did Stacey Solomon go on maternity leave?

She was waved off in style by her Loose Women colleagues in August.

The gang threw her a baby shower live on air and gave her a babygro emblazoned with ‘Little Loose Women’.

At the time, Stacey admitted: “I decided to stop earlier this time than with Rex because the last time I had my last show I gave birth the next day. And I must say I wasn’t ready at all.”

She said she planned to take five months’ off, returning to the ITV lunchtime show after Christmas.

Read more: Stacey Solomon thanks Instagram fans for ‘making her feel pretty’ as she wows with new hair look

But despite being on maternity leave, Stacey is still on telly screens.

The star’s new BBC show Sort Your Life Out kicked off a fortnight ago and has been really popular with viewers.

Stacey, who filmed the series when she was pregnant, was gobsmacked to learn a whopping 2.5 million people tuned in to see the first episode.