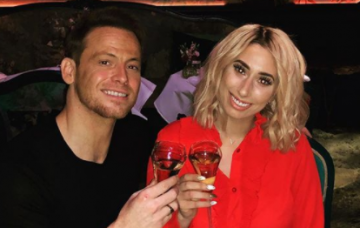 She laid her cards on the table up front

Stacey Solomon has revealed she  told Joe Swash she wasn’t interested in a casual relationship when he first asked her out.

The mother of two told Fabulous magazine she doesn’t believe in dating someone unless it has a future, so when Joe asked her out, she laid her feelings on the line.

They had been working together on I’m A Celebrity’s spin-off show in Australia when Stacey realised perhaps there was something between them.

“It took me by surprise because I wasn’t looking for a relationship. Even though I fancied him, I didn’t really think anything would come of it, so I just thought, ‘This is nice but I’ll probably never see him again,'” she recalled.

However, back home in the UK she said “persistent” former EastEnders star Joe made a move.

“He asked me out, and I was like: ‘Hmm, no, I don’t want to be in a relationship unless I want to be in it forever, and so if this is just a date then no thank you,'” she explained.

“I couldn’t have one-night stands. I don’t want to go out, have sex and never see them again. I would never do that. If I have a relationship, it’s all or nothing.”

Clearly Joe agreed with Stacey’s way of thinking as they’re still together and happier than ever!

Stacey is mum to sons Zachary, nine, and Leighton, five, from previous relationships, while Joe has son Harry, ten, with his ex-girlfriend.

She previously told The Mirror that she’d warned Joe ahead of their first date that the kids would always be the most important thing in her life.

“The first thing I think I said was, ‘I have two kids, two cats, a dog and massive mortgage. If you still want to go on a date with me, great,'” she recalled.

“I’m not single Stacey who you might date for a few weeks – I’m always going to have these two people in my life.

“If you’re going to date me you are going to see my kids because they are in my life, I’m their primary carer. It’s me and them. It is what it is.”

The couple recently told OK! magazine they are both on the same page when it comes to their future, but won’t be rushing into anything like marriage.

As for the secret to their happy relationship, Stacey said: “We have very similar morals and values, plus we grew up in similar areas. It’s good that we work in the same industry too, as we understand each other.”

Read more: Kym Marsh pleads with eldest child to live with her until he’s 30

She added: “When you are with someone who isn’t in the public eye, it can be very tough.”

Joe agreed the couple are “similar in many ways but we’re different too, which I think is important.” He said: “We do disagree on things like politics, but that’s healthy. We’re always debating things.”

Do you think disagreements are healthy in relationships? Leave us a comment on our Facebook page @EntertainmentDailyFix and let us know what you think!