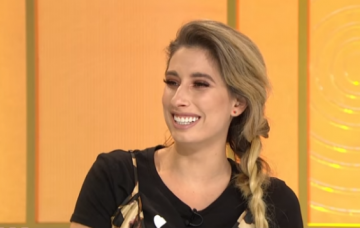 She described the Loose Women set as a comfortable environment

Loose Woman Stacey Solomon has spoken out about being ‘loose-lipped’ on the show, admitting: “It’s too difficult to hold it in sometimes!”

Famous for her down-to-earth nature and honest opinions, Stacey says she often feels she’s gone too far, and is left scared to look at her phone in fear of what people may be saying!

“Trust me, so many times I’ve walked off and thought, “Oh my gosh, I don’t even want to look at my phone right now, who have I upset today?'” she told The Mirror.

Stacey said it’s easy to forget about the cameras as the Loose Women panel are genuinely friends and so comfortable with each other.

Stacey added: “You’re sitting at a desk and think, ‘Ooooh I’ve got something to say’, and then you say it and before you can stop your mouth from speaking it’s coming out and you’re sort of sitting beside yourself watching yourself saying something you really shouldn’t be.”

In February, Stacey described her sex life with boyfriend of two years, Joe Swash, as like ‘tumbleweed’.

She also revealed on Celebrity Juice that boyfriend Joe sometimes wees in their joint-bath.

Along with posting selfies with no-make up and speaking honestly about her troubles with acne in her twenties, the mum-of-two has also spoken about everything from body confidence to childbirth.

Stacey even posted a video of her washing her wig in the bath as it balanced on her knee – leaving her fans, and us, in stitches.

And despite her possible regrets, fans love her honest approach.

“Stacey Solomon is actually a breath of fresh air. She’s so stripped back, down-to-earth and just normal. She’s such a positive role model @staceysolomon #loosewomen,” one fan tweeted recently.

Do you love Stacey’s honesty? Leave us a comment on our Facebook page @EntertainmentDailyFix and let us know what you think!