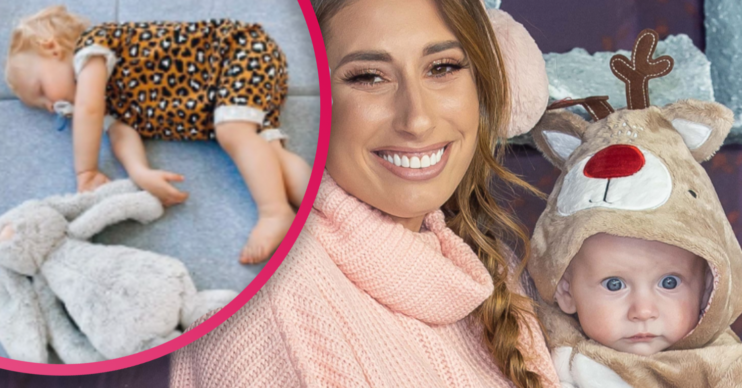 The presenter headed off to Loose Women whilst her son napped

TV personality Stacey Solomon has revealed she often gets worried when leaving baby son Rex to sleep by himself.

The 30-year-old star took to Instagram to share her nerves as she posted a snap of the one-year-old today (July 17).

The photo showed Rex sweetly napping ahead of Stacey’s appearance on Loose Women.

She captioned the shot: “See you soon pickles. Sometimes I get a little worried leaving when he’s napping in case he wakes up and looks for me and can’t find me… is that weird?

“He never does haha… But it does through my mind every time.”

It certainly isn’t the first time Stacey has revealed her nerves over leaving Rex.

Soon after his birth last year, the presenter opened up about being too afraid to leave her son to have a date night with boyfriend Joe Swash.

She shared a lengthy post on Instagram to explain why she was scared to leave little Rex with someone else.

Instead, the couple came to a compromise and enjoyed a cosy night in the back garden.

She posted a pic of herself with Joe and their little one and wrote alongside: “Date night…So I still haven’t plucked up the courage to leave the baby with someone for the night so that Joe and I can have a night to ourselves.

“I do realise I’m probably taking longer than the average person but all in good time.

“There’s no need to rush is there? Joe’s dying to go out and have a date night so we’ve decided to have one in the garden.”

The honest post followed shortly after Stacey, who gave birth in May 2019, bravely opened up about her fear of leaving the house within the first few weeks of having Rex.

Earlier this week, the mum-of-three was forced to apologise to fans after accidentally sharing a photo of Joe with his trousers undone.

Stacey posted a photo of Joe and their son to her social media account, but later realised her man’s trousers were completely open.

Addressing the mistake on Instagram, she said: “Just in the car on our way out.

“I was watching back my stories and realised that the picture I took of Joe and Rex that I thought was just the cutest picture ever, Joe ain’t even got his trousers done up.”

The couple share son Rex, while Stacey is a mum to Zachary, 12, and Leighton, eight, from previous relationships.

Joe is also a proud dad to 13-year-old son Harry.