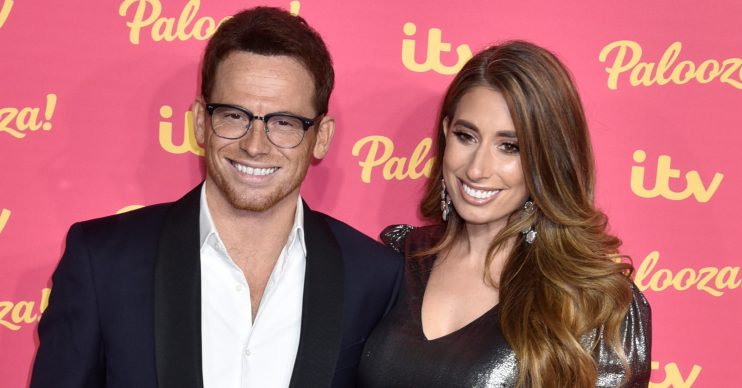 And she's bought him something amazing for Easter...

Only last week, Joe Swash was on a massive high after winning this year’s series of Dancing On Ice.

But you have to take the rough with the smooth, as the old saying goes, and just days after his televised triumph, he’s laid up in bed with a poorly ear.

Referring to Joe by the nickname she’s given him, she said: “Loads of you asking where Hoe is today… his ear is really playing him up so he’s in bed resting.”

I’m quite please [sic] because now he won’t find out that I caved. Gotta find somewhere to hide it until Easter.

The camera then pans round to reveal a HUGE wreath made of chocolate eggs that Stacey has bought her man.

She adds: “But I’m quite pleased because now he won’t find out that I caved. Gotta find somewhere to hide it until Easter.”

Read more: John Barrowman reveals he wants to return to Dancing On Ice

Before the final, Joe had to go to hospital to have his ear drained after Alex accidentally kicked him in rehearsals.

Afterwards, Stacey – who also has two sons from previous relationships – shared a family photo with her fans on Instagram, to convey how much she and the kids had missed Joe.

The caption for the pic said: “We finally have him back. We’ve missed you sooooo much but it was all worth it.

“Me and all of our boys are so proud of you and so lucky to have a role model in our lives to show us that if you give something you care about absolutely EVERYTHING you’ve got and work as hard as you can to achieve the impossible.

“It certainly felt impossible when you started. Can’t wait to actually wake up with you every morning.

“We love you to the moon and back. Thank you all, he couldn’t have done it without you. Love you.”

After his win on the ice, Joe admitted that he’d LOST the trophy at the after-show wrap party.

Appearing on This Morning, he admitted: “We didn’t find it. We’ve been told someone found it under a table.”

No doubt he got an earful for that!

Are you glad Joe won Dancing On Ice? Leave us a comment on our Facebook page @entertainmentdailyfix.