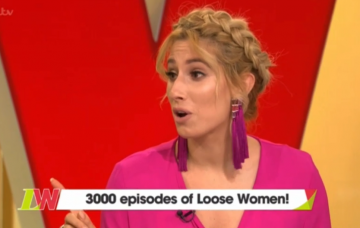 Loose Women marked 3,000 episodes on Tuesday and to celebrate, the panellists reminisced about their first time on the show.

Stacey Solomon, who has been on the panel since 2016, made a funny relevation about something she did on her very first day as a Loose Woman.

The singer revealed she spoke about her boyfriend Joe Swash throughout the entire show when nobody was meant to know they were dating.

“I remember my first day,” Stacey said. “I was really, really nervous and worried about what I was going to be like, but actually everyone was so warm and inviting.”

“And the first show, I remember me and Joe weren’t officially a couple and the whole show I spoke about Joe, but I wasn’t supposed to!” she added, laughing.

“I wasn’t supposed to let it get out there,” she said. “And it hasn’t stopped!”

Stacey and Joe started dating early in 2016 and initially kept their romance a secret.

Now two years on, many fans are wondering when the couple will take the next step and get engaged.

Last week, Joe appeared on Loose Women and spoke about the possibility of marrying mum-of-two Stacey.

Ruth Langsford asked the star if he feels pressure to get down on one knee and propose.

“I don’t feel pressure,” he replied. “We’re flattered by it because people love Stacey and they like to see us together and they want the best for us.”

On the show, Joe had also written a letter for Stacey in reply to the gushing text she sent him on the show last month.

Reading out his love note, Joe said: “Dear Stacey, thank you so much for your lovely letter a few weeks ago. I have decided to return the favour.”

“Going to the bathroom, knowing you have been there before me because of the leg hair in the bath and a blunt razor on the side,” he added, as Stacey covered her face with paperwork.

“But all these things make me love you more Stacey, I feel like a very lucky man,” he concluded.

How can you not love these two?

Meanwhile on today’s show, the other panellists opened up about their first day on the panel.

“I remember being quite nervous,” Janet recalled. “It was very like the first day of school.”

Ruth first appeared on the show in 1999, on the second day of the first series.

“I don’t actually remember what we talked about,” she admitted. “I probably had orange hair… fortunately [producers] haven’t found any clips of that!”

When did you start watching Loose Women? Leave us a comment on our Facebook page @EntertainmentDailyFix and let us know what you think!