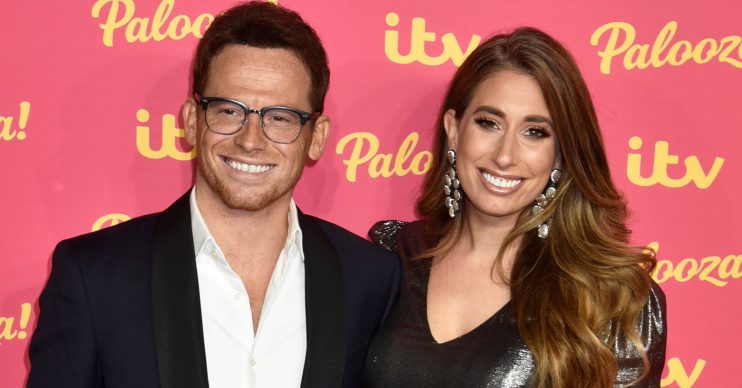 Joe won the show at the weekend

Joe was crowned the winner of the series on Sunday night (March 8) alongside his pro partner Alex Murphy after beating runner-up Perri Kiely and pro Vanessa Bauer.

Earlier this week, Stacey shared a family photo to Instagram with Joe, her sons Zachary and Leighton, his son Harry and their little boy Rex.

In the adorable photo, Joe’s 12-year-old son Harry is seen holding his Dancing On Ice trophy.

Stacey captioned the post: “Bunnndddllleeee…. We finally have him back. We’ve missed you sooooo much but it was ALL worth it…

We’ve missed you sooooo much but it was ALL worth it.

“It certainly felt impossible when you started can’t wait to actually wake up with you every morning… We love you to the moon and back.

“Thank you all he couldn’t have done it without you, love you.” (Sic)

Stacey was left shocked when Joe was announced as the winner on Sunday night.

Sitting in the audience, the Loose Women presenter hugged their baby boy Rex as her jaw dropped to the floor.

Following the show, Stacey wrote on Twitter: “Firstly, EVERYONE in the final tonight was AMAZING & deserved that trophy. Secondly, Joe we‘re all so immensely proud of you.”

“To anyone who voted, thank you from the bottom of our hearts. He put his heart & soul into DOI & has LOVED every minute. It meant the world to him. So thank you.”

She added on her Instagram Stories: “I really wanna say thank you by the way, not just to people who have voted just thank you to anyone who has ever been nice, kind and supported someone and built them up, you have no idea what difference that makes to somebody.”

“I still can’t believe it,” Stacey continued. “EVERYONE in that final deserved to win so it’s hard to believe Joe done it.

‘I’m gonna be one of them dads at Christmas, chucking out some Bolero moves!’@realjoeswash will return to the ice… after he’s let his skates air out! ⛸ pic.twitter.com/4GEKmA9f59

“We are so proud and happy for him, we love you to the moon back @realjoeswashy.”

On Monday’s This Morning, Joe said: “It’s been the craziest journey, it’s been so long, I think we’ve been doing it since September.

“I can remember spending days and days just trying to push off straight, it’s all a bit surreal to be honest.”