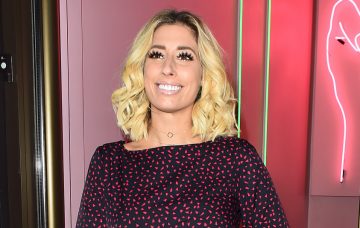 Stacey Solomon is getting hairy for Movember

She won't be shaving or waxing this month!

Stacey Solomon has become a brilliant advocate for body confidence and now she’s announced she’s growing out all of her body hair!

In homage to Movember, when men grow their facial hair to support the Prostate Cancer charity throughout November, the reality star and Loose Women panellist, 29, is going to ditch the razor.

It comes as her co-host Nadia Sawalha, 53, said she would be letting her lip hair grow for the month-long cause and joked that she would end up with “a moustache”.

Stacey told Nadia on Loose Women today: “Yesterday I was watching Nadia and you announced you were going to take part in Movember and I just admire you so much.

“I’m going to join in in solidarity and let it grow.”

When the women discussed where exactly they would be keeping things natural, Stacey added:  “You don’t have to ask me that question. It’s all over.”

When her co-host Andrea McLean, 48, questioned: “Everything?” Stacey then joked: “I might as well. If I’m going to let one thing (go) it’s not really fair to the other hairs.”

We do love her honesty!

Speaking of hairy, Stacey got a taste of what it would be like when she dressed up as Cousin Itt from The Addams family on the ITV show for Halloween this week!

Read more: Andrea McLean breaks down over death of her beloved dog

The former X Factor star also pointed out the convenient timing of her fuzzy plan. Her partner Joe Swash is heading off to Australia for the next month, where he will be presenting I’m A Celebrity…Get Me Out Of Here! spin-off Extra Camp with Scarlett Moffatt and Joel Dommett.

Joe, 36, revealed how much we was going to miss Stacey and her sons Zachary, ten, and six-year-old Leighton.

Before jetting to the other side of the world, the EastEnders actor, who recently moved in with Stacey and her boys, posted on social media: “I’m going to miss these guys xxxxx”.

But she then cheekily posted that she wouldn’t miss his snoring on Instagram earlier today!

This isn’t the first time the mum-of-two has been candid about her body.

In March she spoke about how she often doesn’t shave her legs and she doesn’t get embarrassed about it either.

Writing in her Fabulous! column, she revealed: “On average, I don’t shave for a month at a time – and I reckon I could go a whole year!

“Joe’s working at the moment so he’s not on holiday with us, but he doesn’t care one bit. He’s the best about it, actually.”

Read more: Joe Swash reveals he will miss Stacey Solomon ahead of I’m A Celeb

She added: “I remember at the beginning of our relationship making loads of effort and shaving loads, but you just get to the point where you forget or life gets in the way.”