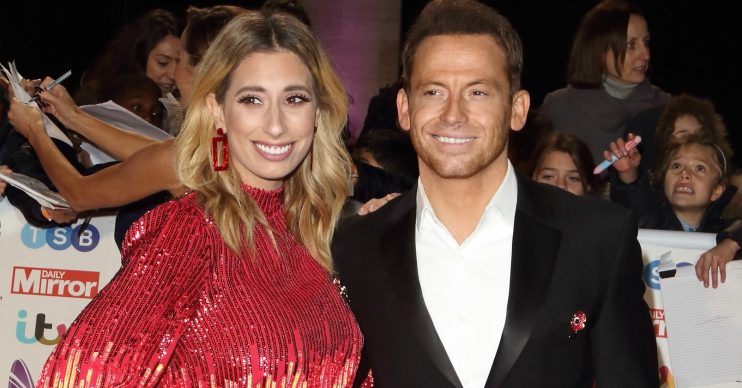 Stacey, 29, took the mick out of her telly presenter partner for layering his look with a striking spotty red and black shirt – offering a glimpse of Joe’s fashion faux pas up to her 1.5 million Instagram followers.

Barely able to stifle her tittering, she continued to express her amusement and surprise at Joe’s get up without directly suggesting he looked ridiculous.

“I was, like: ‘Oooh!'” Stacey said, wide eyed and with a mocking tone.

“What’s the matter?” Joe could be heard protesting in the background.

“It’s so interesting!” she replied, as if ‘interesting’ was the nicest thing she could possibly say about her unborn child’s father’s outfit.

He insisted: “I’ve worn this before!”

But Stacey was still overwhelmed by laughter, which continued as Joe accepted his teasing in good humour and struck several poses in his garish togs.

“It is funky,” she snickered sarcastically as Joe straightened his collar and gave watching fans on social media a twirl.

“You were thinking of going for a flash of ‘ladybird’, were you, today?” Stacey joked in her final dig.

Hilariously, I’m A Celebrity host Joe responded to the creepy-crawly clothing gag: “I work in the jungle!”

The couple are expecting their first child together.