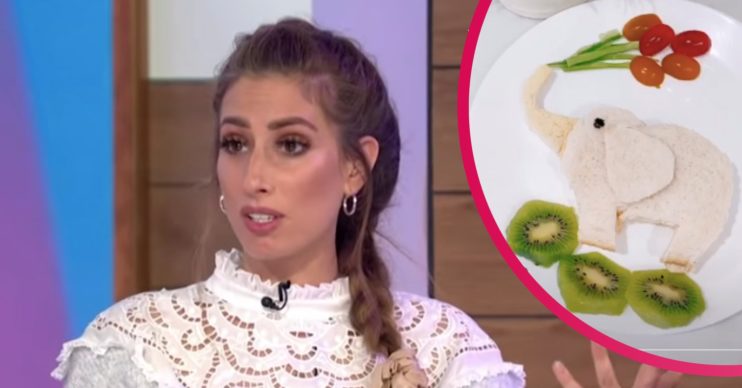 The Loose Women star couldn't be bothered to cook a dinner

Stacey Solomon has preempted critics after serving her sons cheese sandwiches for dinner.

The Loose Women star, 30, plated up the sandwiches after admitting she “couldn’t be bothered” to cook.

In true Stacey style, she shaped her boys’ meals like elephants and added some kiwi, green beans and cherry tomatoes to the plate.

But unfortunately for the star, she felt she had to see off critics before they slammed her for not cooking.

Addressing the ‘Susans’, as she calls trolls, Stacey wrote: “No Susan. I can’t be bothered to cook but yes I can be bothered to cut their cheese sandwiches into elephants.”

She could then be heard in the Instagram stories, saying: “I’m not cooking tonight. It is cheese sandwiches for dinner!”

Stacey decided on the elephant theme after a visit to a safari park with sons Zachery, 12, Leighton, seven, and one-year-old Rex.

She added: “I’m going to make them in the shape of an elephant because we loved the elephants today.”

Giggling, Stacey continued: “I’m gonna chuck some kiwi on there just for some five-a-day goodness.”

When has Stacey had to hit back at trolls?

But it does mean she has found herself occasionally coming under fire from keyboard warriors about her parenting.

Earlier this month, Stacey was forced to address her followers after letting Rex eat blackberries.

The mum-of-three, who is in a long-term relationship with Joe Swash, gave the fruit to her son while out walking.

Alongside a video of him eating them, Stacey wrote: “Nope Susan I didn’t wash the berries…

“I forgot to bring my sink with us but it stopped him from eating the mud so I went with it.”

But this didn’t stop the parenting police. Sitting in her garden,  Stacey later told fan: “So many of you messaging asking if I’m worried about bugs that can live in berries… I’m not.

“I’m pretty sure they’re safe to eat… extra protein too.”

Earlier this year, Stacey also slammed a troll who accused her of letting Rex eat her lipstick.

The star had received a message from ‘a Susan’ after sharing a funny video of Rex after he found her lippie.