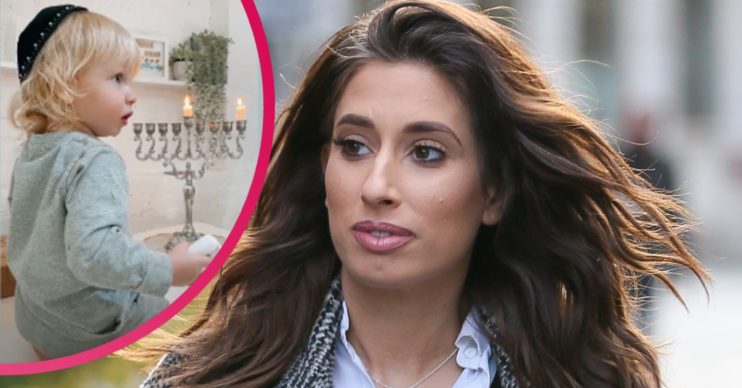 The Loose Women panellist didn't do anything wrong!

Stacey Solomon has been falsely accused of breaking lockdown rules whilst celebrating Hanukkah with her family.

The Loose Women star, 31, sparked criticism as she looked after her nieces on the evening of the Jewish festival.

But it appears Stacey is completely innocent, as government guidelines state that childcare for young children is permitted.

The TV star documented the occasion on her Instagram profile yesterday (December 10).

Taking to her Story, Stacey revealed they were even visited by Santa Claus – right in the middle of the family’s celebrations.

As Stacey celebrates both Christmas and the Jewish festival, the group appeared delighted by the mix of traditions.

Sharing a clip of the kids waving at Father Christmas, she explained: “We weren’t expecting that! My nieces are here too because my sister and brother in law are working so it was even more special… Now for Chanukah dinner.

“Thank you @SpaceNK Santa for visiting our road… We know you have so many others to see so you didn’t have to squeeze us in!”

Read more: Stacey Solomon in hysterics after troll calls her a ‘cheapskate’

According to The Mirror, the star was then falsely accused of “mixing households” by having her sister’s children with her.

However, there are exemptions for “childcare” reasons as Stacey falls under COVID restrictions for Tier Two.

The government website states: “Parents are able to form a childcare bubble with one other household for the purposes of informal childcare, where the child is 13 or under.”

Earlier this week, Stacey revealed she marks both Christmas and the Jewish festival, as her mum was raised as Christian before converting to Judaism to marry her dad.

It’s been an eventful few days for Stacey after appearing alongside boyfriend Joe Swash on Loose Women.

Ruth Langsford and Eamonn Holmes joined the couple on the ITV panel show on Wednesday (December 9).

Ahead of the show, Stacey revealed Joe wasn’t very happy about his outfit.

She joked: “It’s only Christmas jumper day on Loose Women and Joe’s fuming.”

Joe sat behind her in the shot, looking grumpy in a brown and white jumper.

Stacey chuckled as she added: “Nice jumper! It’s better than the V-neck.”

She wrote in the caption: “Joe bought all his favourite V-neck T-shirts to wear on Loose Women today, only to find out his worst nightmares have come true…”